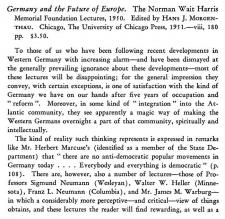 Hans J. Morgenthau (1904-1979) was an American political scientist who taught at the University of Chicago and at the Graduate Center at the City University of New York. His classic text, Politics Among Nations, was the leading work for students of international politics for over a quarter century.

Hans J. Morgenthau was born on February 17, 1904, in Coburg, a small town in central Germany which is now part of northern Bavaria. His father was a doctor who discouraged his son from attending the University of Berlin, saying: "You are out of your mind. You'll never get in. Go to a lesser school instead." His father's attitude created in the son an inferiority complex, a fear of being rejected, and an undisguised shyness that persisted throughout his life. If his father was tyrannical and authoritarian, his mother was warm and supportive. He remembered being ridiculed when, having graduated first in his class, he spoke at a founder's day ceremony celebrating the crowning of the duke of Coburg. When he made his presentation, the duke and other nobility displayed their anti-Semitism by holding their noses, thus suggesting that all Jews smelled bad.

As a schoolboy during World War I and its aftermath, the young Morgenthau witnessed the defeat of a powerful and confident German army and the flight of that government's leaders. The Weimar regime which followed lacked an understanding of power and a broadly representative political base. The former ruling class, who were dominant in communities like Coburg, propounded the "stab in the back" thesis—that is, the fighting ended with no foreign troops on German soil; therefore, the nation had not been defeated in war, but was brought down by traitors within— socialists, trade unionists, Jews, Catholics, liberals, and Freemasons. The Weimar regime was destroyed by its inability to govern and to use power and by forces of irrationalism in politics such as blaming military defeat and rampant inflation primarily on the Jews. Morgenthau recalled his mother going to market with a basketful of paper money and his physician father accepting butter, eggs, chickens, or textiles rather than worthless money for his services.

For his advanced studies the young Morgenthau first enrolled in 1923 at the University of Frankfort but later transferred to the University of Munich. He never studied at the University of Berlin. His earliest intellectual interests were philosophy and literature, a harbinger of his determination to see the general in the particular in his approach to history. At first his goal was to become either a writer, a professor, or a poet. In choosing his vocation he was propelled by a deeper concern. In September 1923 he wrote: "My hopes for the future move in two directions. I hope for the lifting of the pressure to which I am exposed by the social environment, and I hope to find a direction and purpose for my future activities. The latter cannot be realized before the former is fulfilled." He explained that his relationship with the environment was determined by three facts: he was a German, a Jew, and had matured following World War I. He vowed to resist the immorality of anti-Semitism and to place service to some higher cause ahead of amassing riches.

In his studies philosophy, with its minute epistemological destructions, left Morgenthau dissatisfied, so at the University of Munich he turned to the study of law. Diplomatic history was a companion interest, and Bismarck's Realpolitik offered him a framework that confirmed certain "isolated and impressionistic judgments on … foreign policy." He also found in Max Weber's thought the model for an approach to political science. He pursued postgraduate work at the Graduate Institute of International Studies in Geneva, was admitted to the bar, and became acting president of the labor law court in Frankfurt. From 1932 to 1935 he taught public law at the University of Geneva and then in Madrid from 1935 to 1936. He came to the United States in 1937 without sponsors or friends. Subsequently he held faculty appointments at Brooklyn College (1937-1939), the University of Kansas City (1939-1943), the University of Chicago (1943-1971), the City College of New York (1968-1975), and the New School for Social Research (1975 to his death).

His first major work, Scientific Man vs. Power Politics, challenged the prevailing "belief in the power of science to solve all problems and, more particularly, all political problems." Drawing on Reinhold Niebuhr, he called for a renewal of faith in "those intellectual and moral faculties of man to which alone the problems of the social world will yield." He also challenged the scientific approach to politics which was dominant in the Charles E. Merriam era of political science at Chicago. However, the university's leadership, and especially its president, Robert M. Hutchins, encouraged Morgenthau while differing with him on such questions as the prospect for world government.

In The Purpose of American Politics (1960) he reviewed the influence of transcendent purpose on American foreign policy from the beginnings of the Republic. By the mid-1960s he had emerged as the foremost early critic of the Vietnam War, warning that nations must never place themselves in a position from which they cannot retreat without a loss of face and from which they cannot advance without unacceptable risk.

Morgenthau's main contribution was in providing a framework for understanding foreign policy. He translated a European understanding of politics and foreign policy to fit the American experience. He defended the uniqueness of American democracy while emphasizing its enduring moral and political foundations. He applied his realist philosophy to problems such as human rights, stressing the need for prudence and practical morality. He tried to explain the interconnection and tensions between abstract moral principles and political necessities in world politics.

The most recent Morgenthau books are his classic text, Politics Among Nations, revised by Kenneth W. Thompson (sixth edition, 1985). Other Morgenthau books include In Defense of the National Interest (revised edition, 1982), which sets forth his framework for analyzing foreign policy; The Purpose of American Politics (1982); and Morgenthau and Thompson, Principles and Problems of International Politics (1981), which presents text and readings of classic writings in international politics. □

Born in Coburg, Germany, in 1904, Hans Joachim Morgenthau became the greatest contributor to the theory of realism in the field of international relations. Until his death in New York in 1980, Morgenthau actively influenced generations of scholars and policymakers, and his writings continue to do so today. Morgenthau’s writings reflect his antipathy toward liberalism and idealism, arguing that the influence of international law, norms, and organizations were minimal at best. Along with E. H. Carr (1892–1982) and George F. Kennan (1904–2005), Morgenthau is known as a founder of the field of international relations.

Before immigrating to the United States, Morgenthau studied law and diplomacy at the universities of Frankfurt and Munich and taught public law at the University of Geneva. In 1937 he fled to the United States due to his Jewish identity and the growing Nazi power in Germany. Morgenthau taught at several universities for short periods before ending up at the University of Chicago, where he taught political science from 1943 to 1971. After his retirement, he taught at City College of New York and the New School for Social Research. In addition to teaching and writing, Morgenthau worked as an adviser and consultant to the U.S. departments of State and Defense in the 1940s and 1960s.

Morgenthau’s first book, Scientific Man versus Power Politics, published in 1946, outlined his belief that human nature is truly selfish and humans have a natural longing to dominate each other through power. By applying his realist philosophy of human nature to politics, Morgenthau argued that all politics was merely a struggle for power. His most seminal work, Politics among Nations: The Struggle for Power and Peace, published in 1948, provided an empirical basis for the theory of realism, the most influential theory in international relations. The theory of realism argues that power is the primary interest of all states in the international community and therefore, policies and actions taken by governments are merely means to achieve or maintain power relative to other states.

Politics among Nations argued that all states in the international community would pursue foreign policies that sought to maintain or achieve relative levels of power and that international politics was therefore about the competition of states to seek power. A major contribution to realist theory was the idea of balance of power, in which Morgenthau claimed that the most powerful states would attempt to balance each other by pursuing certain foreign policies to either gain more relative power or suppress the relative power of another state. Unlike political scientist Kenneth Waltz, who later argued that bipolarity was the most stable type of power balance, Morgenthau was skeptical that the balance of power between the United States and the Soviet Union was stable. Rather, Morgenthau argued that there should be a larger number of great powers in order to achieve stability in the international system. In addition to Politics among Nations, Morgenthau published many other books and hundreds of articles about power politics, diplomacy, U.S. foreign policy, cold war politics, and U.S. relations with the Soviet Union.