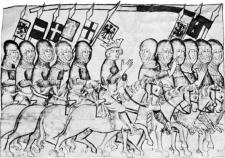 Henry VII (c. 1274-1313) was Holy Roman emperor and king of Germany from 1308 to 1313. He is often called the last medieval emperor, since his vision of the grandeur of the imperial office resembled that of his much more powerful predecessors.

When he was elected Holy Roman emperor in November 1308, Henry, Count of Luxemburg, was the ruler of a modest territory between Germany, France, and Flanders. The German ecclesiastical and lay princes to whom fell the lot of electing the emperor had established the policy since 1273 of electing a comparatively obscure candidate to the imperial throne in order to avoid the creation of too powerful an imperial monarchy. In that year they had elected Rudolf I of Hapsburg, and in 1291 Adolf of Nassau. Henry was elected precisely because of his meager personal resources, and, like his predecessors, he used some of the imperial resources to increase the wealth and power of his dynasty.

Not only Henry's relative obscurity, however, but his personal character and ability also appealed to the electors. Educated in France, he was a fair, slim man with intelligent features, courtly behavior, and considerable kindness. He was pious and temperate in his life-style, but he was also an excellent administrator who had succeeded in increasing his power and intelligently using his modest wealth even before his election. His reign as emperor was occupied with two major concerns: the extension of the Luxemburg family influence and the pacification of Italy.

In 1310 Henry took an oath to the Pope, promising to fulfill his imperial duties properly but also demanding a quick coronation in Rome. In the same year Henry raised Luxemburg to the status of a duchy and named his son John its duke. He then married John to Elizabeth of Bohemia. He backed a military expedition that placed Elizabeth and John on the Bohemian throne and began the aggrandizement of the Luxemburg house, whose Bohemian kingdom would provide three more emperors in the next century: Henry's grandson Charles IV and Charles's sons Wenceslaus and Sigismund.

In 1310 Henry also began his journey to Italy to pacify the faction-ridden cities and receive the Lombard crown at Milan and the imperial crown at Rome. Henry's arrival was hailed by many Italians, including the great poet Dante, as the coming of the "King of Peace." Indeed, something of Henry's character may be inferred from the tributes which Dante paid him, ranging from the poet's letters, to his political tract On Monarchy, to the moving lines in the Paradiso which depict the glorious throne and crown which await the Emperor in Heaven.

Henry was not, however, to bring the peace he wanted to Italy. As soon as he arrived in Milan, the political rivalries which tore the city involved the Emperor, and Henry found himself forced to take sides in political quarrels and successfully led his army against the cities of Cremona and Brescia. By 1312 he arrived in Rome, by then opposed by many cities, the King of Naples, and even the Pope himself. On June 29, 1312, Henry was crowned emperor by the cardinal bishop of Ostia, the papal legate, in the church of St. John Lateran, his enemies having occupied St. Peter's.

Faced with papal opposition to his continued presence in Italy and furious with the King of Naples for opposing his imperial mission to Rome, Henry called an imperial Diet at Pisa in 1313, assembled another army, and marched again toward Rome, determined to free the city from Neapolitan occupation. On his way, Henry, who was recovering from malaria, unwisely exerted himself, caught fever, and died on Aug. 24, 1313. His body was returned to Pisa, where it was buried in a magnificent tomb in the Cathedral.

Henry's sincere idealism, his respect for the imperial office and its duties, and his promise of justice attracted many men to him, including some of the most astute minds of Italy. Dante was not alone in his praises of the Emperor. But Italian political rivalries, traditional suspicion of a German emperor in the Italian cities, and the concerted opposition of Pope Clement V and King Robert of Naples destroyed any hope that Henry had of being able to accomplish his mission as imperial peacemaker. His frustrated Italian campaign weakened his diplomatic arrangements in Germany. His glorious concept of the imperial ideal was not sufficiently realistic to deal with the complex diplomatic forces which opposed the notion of a universal political authority—the power of France, the Avignon papacy, and the rising signorial power of city rulers and city alliances. For Italy as well as for Germany, Henry was indeed the last medieval emperor.

Henry Iii (holy Roman Empire) , Henry III (1017-1056) was Holy Roman emperor and king of Germany from 1039 to 1056. The medieval empire is generally considered to have attained its… Guelphs And Ghibellines , Guelphs and Ghibellines (gwĕlfs, gĬb´əlēnz, –lĬnz), opposing political factions in Germany and in Italy during the later Middle Ages. The names were… Frederick Iii (saxony) , FREDERICK III (HOLY ROMAN EMPIRE) (1415–1493; ruled 1440–1493) FREDERICK III (HOLY ROMAN EMPIRE) (1415–1493; ruled 1440–1493), Holy Roman emperor. A… Henry Viii , Tudor dynasty king of England from 1509 until his death, best known for his defiance of the Catholic pope in the matter of his divorce from Catherine… Thomas Wolsey , The English statesman and prelate Thomas Wolsey (ca. 1475-1530) was virtual ruler of England as chief minister to Henry VIII. He fell from favor beca… Frederick I (holy Roman Empire) , Frederick I (1123-1190), or Frederick Barbarossa, was Holy Roman Emperor from 1152 to 1190. He was one of the greatest monarchs of medieval Germany,…