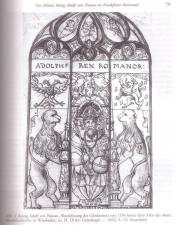 Nassau (nä´sou), former duchy, W central Germany, situated N and E of the Main and Rhine rivers. It is now mostly included in the state of Hesse, and partly in the state of Rhineland-Palatinate. Wiesbaden was the capital; other towns included the mineral spas of Bad Homburg, Bad Schwalbach, and Schlangenbad in the beautiful Taunus hills and Bad Ems on the Lahn River.

The region takes its name from the small town of Nassau, on the Lahn E of Ems, where the original castle of the house of Nassau was built in the early 12th cent. by a count of Laurenburg. His descendants took the title count of Nassau. In 1255 the dynasty split into two main lines and divided the territory in half. In 1806, Nassau, which had received some territorial additions, joined the Confederation of the Rhine and was raised to a duchy.

In 1816 the territories belonging to the various branches of the Walramian line were united by Duke William (1816–39). His successor, Adolf, sided against Prussia in the Austro-Prussian War (1866) and as a result lost his duchy to Prussia. Nassau was then united with the former Electoral Hesse to form the Prussian province of Hesse-Nassau. Duke Adolf of Nassau, however, succeeded in 1890 to the grand duchy of Luxembourg, where his descendants continue to rule.

The Ottonian line of Nassau acquired (15th cent.) the lordship of Breda and settled in the Netherlands. It came into European prominence in the 16th cent. with William the Silent, who inherited the principality of Orange in S France and became stadtholder of the Netherlands. His sons, Maurice of Nassau and Frederick Henry, succeeded him as princes of Orange and as stadtholders; these titles then passed to Frederick Henry's son, William II of Orange, and to William's son William III, who also became king of England.

William III died (1702) without direct heirs, and the principality of Orange (which had become purely titular) passed to John William Friso, of the collateral branch of Nassau-Dietz. His son, Prince William IV, became (1748) hereditary stadtholder of the Netherlands, and from him all subsequent rulers of the Netherlands (except Louis Bonaparte) are descended in direct line. The Dutch line of the Nassau family is known as the house of Orange.