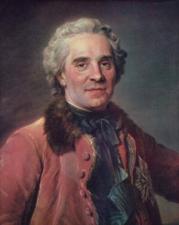 Hermann Maurice, Comte de Saxe (1696-1750), was a marshal of France. His active campaigns, methods of organizing and training troops, and general principles of warfare influenced both his own and later times.

Maurice de Saxe who is known as Marshal Saxe, was born in Dresden on Oct. 28, 1696, the first of the 354 acknowledged illegitimate children of Augustus II, Elector of Saxony and King of Poland. His mother was the Countess Aurora von Konigsmark. Like his father in "his fabulous strength, the immensity of his appetites, and his limitless lust," Saxe also possessed a high intelligence.

When he was twelve years old, Saxe entered the Saxon army. He fought in the battle of Malplaquet under the Duke of Marlborough and Eugene of Savoy. By the time of the Peace of Utrecht, he had participated in four campaigns in Flanders and Pomerania and had commanded a cavalry regiment. He served under Eugene in the war against the Turks, and in 1717 he took part in the capture of Belgrade.

In 1720 Saxe went to Paris, becoming a camp marshal to the Duc d'Orléans. When his father died, he was offered the command of the Saxon army, but he preferred to remain in France. Saxe fought in the War of the Polish Succession (1733-1738) as a lieutenant general. In the War of the Austrian Succession (1740-1748), after leading his troops in a successful surprise attack on Prague in 1741, he restrained them from pillaging the city.

In 1743, made marshal of France, Saxe was placed in command of an army assembling at Dunkirk for a proposed invasion of England. When France declared war on England in 1744, he took operational command of the main army in Flanders, led personally by Louis XV. Later Saxe took full control.

In May 1745 Saxe led his army of about 70,000 men to Tournai and invested the city, which was defended by 50,000 English troops. On May 10 he moved 52,000 troops to Fontenay to block an allied relief force, which he defeated. Then he took Tournai, Ghent, Bruges, Audenarde, Ostende, and Brussels. These battles, plus Rascoux in 1746 and the capture of Maastricht in 1748, firmly established Saxe's reputation. In gratitude for his services, Louis XV gave him life tenure of the château of Chambord.

There Saxe wrote Mes rêveries (My Reveries), his reflections on the art of war. His descriptions of how to raise and train recruits and how to establish garrison and field camps soon became standard procedure. Saxe stimulated acceptance of breech-loading muskets and cannon and invented a gun capable of accompanying the infantry. He rediscovered and initiated the practice of marching in cadence, lost since the Romans. He also modified the normal linear battle formations and tactics of his day by using an embryonic form of attack column that required less training and became the usual assault method a hundred years later.

A fearless man in battle, Saxe led a dissolute life of between campaigns. He died at Chambord on Nov. 30, 1750.