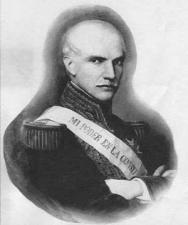 Gabriel García Moreno (1821-1875) was an Ecuadorian political leader whose dynamic leadership brought stability and improvement to his country. Though mostly governing as a dictator, he broke the power of the military and raised the influence of the Catholic Church.

On Dec. 24, 1821, Gabriel García Moreno was born in Guayaquil. His father, Gabriel García Gómez, was a Spaniard; his mother, Mercedes Moreno, belonged to one of the most distinguished and oldest families of that city.

At 15 García Moreno was sent to Quito to complete his education. At 17 he received minor orders in the Church; but he soon abandoned the idea of an ecclesiastical career and switched to law, in which he received his doctorate in 1844. In the meantime, his interest in politics arose. He was an admirer of Vicente Rocafuerte, whom he followed into opposition against Gen. Juan José Flores.

In 1846 García Moreno married Rosa Ascázubi, several years his senior. This marriage gave him a secure political base through membership in Quito's ruling class, a position his family already enjoyed in the port city of Guayaquil. In 1851 he was instrumental in the government's readmission of the Society of Jesus. When Gen. José María Urbina took over the presidency and expelled the order anew, García Moreno published a Defense of the Jesuits. He was forced into exile in Colombia, Peru, and Europe, and though he was elected to the Senate, the government did not allow him to return. Back in Ecuador by the end of 1856, the following year he was elected mayor of Quito and rector of the university, having won recognition by European scientific societies for his fieldwork in vulcanology.

In 1857-1858 García Moreno was a member of the Senate. He led the opposition against the government while the country was being invaded by the Peruvian army. In January 1859 he fled to Peru but soon returned to Quito as one of the members of a newly formed revolutionary junta. Defeated by the regular Ecuadorian army, he had to flee once more to Peru. He offered his alliance to the Peruvian president, then sought French aid, in exchange for which Ecuador would have become a protectorate of France. Though all this scheming proved to be fruitless, the political situation within Ecuador suddenly changed. By September 1860 García Moreno was in control of the republic, having achieved military victory with the help of his old enemy Gen. Flores.

García Moreno's tenure as president was legalized by the Constituent Convention of 1861. During his first term, which ended in 1865, he maintained with harshness the government's stability in face of constant attacks on the part of Gen. Urbina and his Liberal followers and was able to wipe out militarism. Twice García Moreno undertook military intervention in Colombia, but both attempts ended in a fiasco. He negotiated with the papacy a concordat that regulated relations between the state and the Church; and to provide the country immediately with sorely needed teachers and at a limited cost, he arranged for the coming of various French teaching orders and the readmittance of the Jesuits.

Since the 1861 Constitution did not allow immediate reelection, García Moreno arranged the election of Jerónimo Carrión (1865). After returning from a diplomatic mission to Lima and Santiago the following year, he found that political power had slipped from his hands. But in the face of mounting opposition President Carrión resigned, and García Moreno regained much of his former influence. Though he was instrumental in choosing the next president, Javier Espinosa, he lost patience with him after a year and led a barracks revolt that overthrew the government (Jan. 16, 1869).

García Moreno consolidated his power through a new constitution. His next 6 years in the presidency were the most positive of his record as chief executive. With practically no visible opposition, he concentrated on bettering higher education and building Ecuador's first railway. In a country that lacked highways, the construction of the paved road from Quito to the coast was of special significance.

On the expiration of his term in 1875, García Moreno chose to succeed himself. Four days before his new inauguration, on August 6, he was murdered by a disappointed Colombian office seeker.