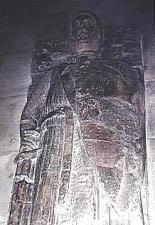 oxford
views updated
Marshal, William (c.1147–1219). William the Marshal began life as the fourth son of a minor lord who was hereditary royal master marshal. From such modest beginnings, he rose to become earl of Pembroke (from 1189), through marriage to the heiress Isabella, and ultimately regent of England (1216–19) at the time of Henry III's minority, a spectacular example of the open-endedness of English aristocratic society at this point. The secret of his success lies in his service to Henry II and his sons, their patronage propelling him to great wealth and power. His martial prowess, quick wit, and integrity led Henry to appoint him as tutor in chivalry to his son, Henry the younger, in 1170. Thereafter, he rose rapidly in royal service, but great wealth came only with his marriage of 1189. From then on, he was one of the crown's greatest subjects. He acted as an associate justiciar during Richard I's absence on crusade and fought for him in Normandy and elsewhere on his return. He was estranged from John, but rallied to his cause during the civil war that followed Magna Carta. After John's death, William, more than any other perhaps, saved England for the Plantagenets following French invasion.

Bosworth Field , Bosworth Field, Battle of English battleground, near Leicester, England, where Richard III was defeated by Henry Tudor (1485). Henry, who claimed to… Henry Iii , Henry III (1207-1272) was king of England from 1216 to 1272. His reign saw the rise of English nationalism and the development of a strong baronial c… William Warham , WARHAM, WILLIAM Archbishop of Canterbury and lord chancellor of England; b. Church Oakley, Hampshire, England, 1450; d. Hackington, near Canterbury,… BEAUFORT, HENRY , BEAUFORT, HENRY Cardinal and bishop of Winchester; b. Beaufort-en-Vallée, France, c. 1375; d. Winchester, England, April 11, 1447. He was the second… Henry Iii (france) , HENRY III (FRANCE) (1551–1589), king of France. Henry III was the last of the Valois dynasty and has claim to be the only intellectual to have ruled… House Of Lancaster , house of Lancaster (lăng´kəstər), royal family of England. The line was founded by the second son of Henry III, Edmund Crouchback, 1245–96, who was c…