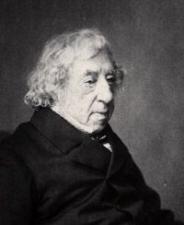 Thomas Cochrane (1775-1860), the 10th Earl of Dundonald, rose through the ranks of the British navy to become an admiral. His career was marked by innovative sea victories, political scandal, and bold strategies that were considered radical by some of his peers.

Thomas Cochrane, born on December 14, 1775 in Annsfield, England, was the elder son of Archibald Cochrane, the 9th Earl of Dundonald, and Anne Gilchrist Cochrane. Young Thomas shared his father's intellectual curiosity and eccentricity; although he was destined to follow a different path than his scientist/inventor father. While his father had led the family into financial ruin with unsuccessful scientific experiments, young Thomas was headed for a military career. His father secured a military commission for Cochrane when he was still a child. By the time Cochrane was in his late teens, he had secured commissions in the army as well as the navy. In 1793, he served on a ship that was captained by his uncle, Alexander Cochrane. Two years later, Cochrane was appointed acting lieutenant of the ship, Thetis, " and remained there until 1798. Cochrane developed a self sufficient, independent personality at a young age and never failed to irritate some of the men that he served with in the navy. Relatively early in his career, Cochrane was received a court martial for showing disrespect to a fellow first lieutenant. The trial was hurried by the more pressing need to get out to sea, and Cochrane received a minimal warning to "avoid flippancy."

Accomplished Much with Little

Young Cochrane soon established a reputation for success and daring in his blossoming naval career. He earned recognition when, in 1800, he was given the command of a ship called the Speedy. This relatively small 158-ton-vessel was crammed with 90 officers and other personnel. With this vessel, Cochrane captured the Spanish ship El Gamo, in 1801. The conquest of El Gamo was unusual in that the odds were stacked against the Speedy. The Spanish ship weighed almost six times more than Cochrane's vessel and carried at least three times as many men. The difficulties in transporting the large number of Spanish prisoners on the Speedy " made this conquest even more unusual in naval history. After a long delay, Cochrane was rewarded and allowed to post rank. Apparently naval authorities were unsure whether the small number of casualties in the operation warranted recognition. Cochrane found the line of reasoning to be ironic. He noted that another peer had been made an earl in a naval incident that involved even fewer casualties. Such remarks did little to earn Cochrane favor with the Admiralty.

In 15 months, Cochrane had collected more than 50 prizes from conquests with the Speedy. While captaining this ship, Cochrane managed to capture a Spanish frigate with fairly low casualties—3 killed and 18 injured. He was later captured by the French but was exchanged, receiving his freedom and becoming promoted to post-captain.

During a short period of peace in 1802, Cochrane pursued studies at the University of Edinburgh. In 1803, the navy ordered him to Plymouth. There he was to captain the ship Arab, which was being refitted for war. Cochrane found the vessel to be useless for this role and wrote a letter to the Admiralty, expressing his displeasure. He was soon sent to protect the coastal fisheries near Orkney, an assignment that lasted 15 months. Cochrane suspected that the Admiralty was giving him a show of their displeasure, since there were no fisheries to protect in the area. He was not allowed to return to England until the current admiral had stepped down and been replaced by a successor.

In a conciliatory attempt to recognize Cochrane for his service, he was given the command of the Pallas and the Imperieuse along the Spanish coast between 1803 and 1806. His capture of goods while he captained these frigates garnered him a large amount of prize money—roughly 75,000 English pounds. He spent the next few years (until 1808) at sea, protecting coastal areas from enemies and defending the Fort Trinidad at Rosas for 12 days with an unusually small force under his command.

In 1806, Cochrane was elected to Parliament, representing the district of Honiton. In 1807, he was elected to represent Westminster. Cochrane's appearance in politics was marked by a radical feistiness. He regularly attacked aspects of government with the same spirit he had shown during naval service. He continued serving in the navy as well.

In 1809, Cochrane was given charge (by Admiral Gambier) to lead the British naval force in the Bay of Biscay and to burn the French fleet that was blockaded in Aix Roads. Cochrane was able to destroy four of the French ships but was unable to get additional assistance from Gambier, who was stationed miles from the scene of action. Cochrane, who held that he would have been able to more effectively destroy the French fleet had Gambier been closer, protested the official honor that was bestowed upon Gambier by the Parliament. Although Cochrane had been knighted for his efforts at Aix Roads, he also demanded that Gambier be given a court martial for the way that he handled the destruction of the French fleet. The request for court martial was not well received by the Admiralty. Cochrane had a history of irking the government with his constant call for parliamentary reform. The Admiralty acquitted Gambier and, in a blow to Cochrane's naval career, prevented him from obtaining any further naval commands. Cochrane was discredited and received only half of his former pay.

Undaunted, Cochrane continued to speak out against naval corruption, fueled by his experience. While still serving in Parliament, he was implicated in a stock exchange scandal in 1814. Cochrane and several others were accused of driving the stock exchange upward by propagating a false rumor of the overthrow of Napoleon. They were suspected of taking advantage of the resultant stock boom to gain a gross profit of 10,000 English pounds. Although the other two men were generally believed to be guilty, Cochrane was considered innocent by some of his constituents. Nonetheless, he was sentenced to imprisonment for a year and fined 1,000 English pounds. In addition, Cochrane was removed from the navy lists, expelled from Parliament, and forced to give up his title. When he was briefly reelected to represent Westminster in 1815, Cochrane escaped from jail and appeared in the House. He was soon returned to prison, forced to serve the remainder of his sentence, and required to pay an additional fine.

Anxious to continue his naval career, Cochrane moved to South America. Here he became admiral of the small Chilean naval force. He played a major role in various initiatives, which led to the eventual liberation of both Chile and Peru from Spanish control. In 1817, Cochrane assisted Chile in its war against Spain, capturing the stronghold of Valdivia and its 15 forts. He also captured the Spanish ship Esmeralda in Callao Harbor. The victories that Cochrane achieved along the South American coastline broke Spanish control of the region and facilitated the independence of Chile and Peru.

In 1823, Cochrane commanded the Brazilian navy in its struggle for independence from Portugal. Using his characteristic surprise tactics, he was able to destroy several Portuguese transports. By anticipating its next move, Cochrane was able to prevent the Portuguese convoy from landing at the port of Maranhao. Between 1823 and 1825, he assisted the Brazilian government to make the transition to newly won independence. His service was honored when several Latin American navies named their ships Almirante Cochrane.

Cochrane left South America in 1825, when he was asked to command the newly-assembled Greek navy. Despite his efforts, infighting and lack of personnel plagued the Greeks. In addition, supplies were slow in coming, especially steamships that Cochrane needed to attack the Turks during the siege of the Acropolis at Athens. He realized that steamships would provide an immeasurable advantage in the narrow waters. At one point, naval personnel could not be paid and refused to serve unless wages were promised. Cochrane was unable to get the men to commit to any service without pay in advance. He later called the collective Greek seamen "the greatest cowards I have ever met with." Cochrane was never paid for his service to the Greeks, although his name was associated with the failure to build a strong navy. Cochrane left Greece, frustrated with the delays in obtaining supplies and the poor infrastructure.

Cochrane returned to his native country in 1828 and began to lobby for a return to his naval career. He was pardoned in 1832 and reinstated in the navy. In 1832, Cochrane received his father's title, becoming the 10th Earl of Dundonald. Between 1848 and 1851, he commanded the American and West Indies stations. He was promoted to admiral in 1851 and rear admiral in 1854. Passionate about naval activity throughout his life, Cochrane was upset when he was refused a post in the Crimean War at the age of 80.

Throughout his career, Cochrane was known as a risk taker with a generous ego. Some of his ideas may have been ahead of their time and were often perceived by the Admiralty as extremely radical. Cochrane insisted on reform or new ways of looking at things—whether in Parliament or in the navy. His initiatives—particularly as a captain—were marked by the ability to accomplish remarkable results with very few resources. He inherited an aptitude for inventiveness from his father, and was responsible for introducing inventions that improved naval operations, including improved lighting, steam propulsion systems, and boilers. He also introduced the concept of using steamships for attack. Cochrane's tactics relied on surprise and the use of new methods to carry out naval initiatives. His secret war plan— which involved the use of sulfur fumes to overwhelm enemy ships and forts—was considered too inhumane for use. The plan was not revealed publicly until 1908. Cochrane died in London on October 30, 1860. He was survived by his wife of 48 years, Katherine Corbett Barnes.

Combat , Combat Sources Transition. In 1350 European warfare was beginning the transition from the medieval style, in which the knight or heavily armored cava… William Eaton , BARBARY WARS The Barbary Wars (1801–1815) resulted from interference by the Barbary States of Tripoli, Algiers, and Tunis with U.S. merchant shipping… Thomas Cochrane 10th Earl Of Dundonald , Cochrane, Thomas, 10th earl of Dundonald [S] (1775–1860). Cochrane had a long and colourful life. The family was impoverished and he had to make his… Sir Francis Drake , Sir Francis Drake The English navigator Sir Francis Drake (ca. 1541-1596) was the first of his countrymen to circumnavigate the globe. His daring exp… William Kidd , William Kidd Captain William Kidd (c. 1645-1701) was one of the most notorious pirates in history. He sailed the coast of North America, the Caribbea… Pueblo Incident 1968 , █ ADRIENNE WILMOTH LERNER The Pueblo incident involved the 1968 seizure and hijacking of the USS Pueblo by North Korean military forces. The Pueblo,…