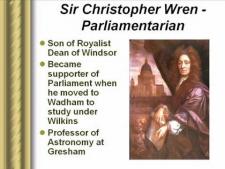 Moray was the first president of the Royal Society of London and contributed significantly to its survival and growth during the early years. Little is known of his early life. He was born between 10 March 1608 and 10 March 1609 and was the elder of two sons. His grandfather was Robert Moray of Abercairney. His father, Sir Mungo Moras of Craigie, in Perthshire, married a daughter of George Halket of Pitfirran.

As a soldier, statesman, and diplomat, Moray played an important part in the politics of England, France, and Scotland. He served in the Scottish regiment which joined the French army under Colonel Hepburn in 1633, was Richelieu’s agent in England during the Puritan Revolution, was knighted by Charles I on 10 January 1643, and became a colonel in the Scottish Foot Guards in April 1645. In the autumn of 1645 Moray went to London as political mediary for the Scots. He later served as royal secretary to Charles I and as confidential agent to the duke of Hamilton. While engaged by John Maitland (1616–1682), duke of Lauderdale, in 1648 to negotiate with the Prince of Wales, Moray befriended the future Charles II. In 1651 he was a justice clerk and privy councillor in Scotland.

Moray’s political life has an indirect relationship to his importance in the history of science. His title, which lent prestige, and his close friendship with Charles II, which aided in obtaining a charter for the Royal Society, may have occasioned his election as first president of the Society. He was also religious, a gentleman of high character, and was well-liked and respected by his colleagues. Furthermore, he was very enthusiastic about the group’s scientific interests. Besides his terms as president, Moray served frequently on the council and on numerous committees and carried on a vast correspondence to procure scientific information. He was fluent in French, German, Dutch, and Italian and strengthened the internation-al character of the Society through his powerful connections and many foreign correspondents. He often served as a liaison for men of science in England, Scotland, America, and on the Continent.

Moray’s versatility and utilitarian view of science are reflected in his knowledge of trades and industrial processes, such as fishing, lumbering, mining, ship-building, windmills, watermills, magnetism, and mineralogy. Chronometry was a major interest; at times he offered advice to Huygens. When Alexander Bruce and Huygens argued over patent rights to the pendulum clock for use at sea, Moray, often a peacemaker when disputes arose, proposed that the patent be taken in the name of the Royal Society.

It appears that Moray earned some renown in chemistry, although no lasting influence can be detected. Anthony Wood recorded that Thomas Vaughan, who became eminent in medical chemistry, served in London under the patronage of “that noted Chymist Sir Rob. Murrey or Moray Kt.” Metallurgy and pharmaceutical preparations were enduring interests throughout Moray’s life; and although nothing is known of his formal education, he wrote to Bruce in 1657 that he was “so far advanced towards the gown as to be already about half an Apothecary” and “I was as long at the Anatomy school as the Chimicall.”

Moray’s direct contributions to science are difficult to assess, but his unabated interest in and work on behalf of the Royal Society and its scientific devel-opments from 1660 until his death in 1673 were perhaps unequaled.

II. Original Works. According to Royal Society records (Letter Books, 16 and 26 Sept. 1665), Moray worked on a history of masonry. Sprat (see below), pp. 257–258, recorded the title, but the work is not preserved in the Archives of the Royal Society. Some of Moray’s papers and letters are listed in Sir Arthur Church, The Royal Society. Some Account of the “Classified Papers” in the Archives. With an Index of Authors (Oxford, 1907). An MS catalog, also compiled by Church, “The Royal Society ‘Classified Papers’ in the Archives Titles and Authors” (1907) (Church MS) includes several references to Moray not in the printed volume. Other Royal Society archival sources include The Letter Books (LBC), The Register Books (RBC), Boyle’s Letters(BL), and Miscellaneous Manuscripts (MM).

Additional writings are “Of the Minerall of Liege Yeilding Both Brimstone and Vitrioll and the Way of Extracting Them Out of it Used at Liege” (RBC.2.35); “The Measure of the Parts of a Gyant Child Borne in Scotland” (RBC.2.50); “An Account Englished Out of French of an Unusuall Way of Cutting the Stone of the Bladder Practiced by a Frenchman” (RBC.2.72); “Of a Spring Near Chertsey” (Church MS); “Of the Way Used Upon the Coast of Coromandell of Cooling of Drincks by Exposing Them to the Heat of the Sun” (RBC.2.50); Murray to Sir P. Vernatti, 21 Sept. 1664 (LBC.1.237); “On a Tumulus in Lord Seamore’s Garden at Marlborough” (Church MS); “Directions for Observing the Conjunction of Mercury With the Sun” (Church MS); “Observations Made in Their Late Excursion Into ye Country,” written with Sir P. Neil and Dr. Wren [FFRS] (Church MS); “Description in German With Drawing, of a Comet of January, 1663/4” [Read 9 March 1663 (1664); comm. by R. M.].

See also “An Extract of a Letter of Mr. Moray” (LBC. 1.280); “Eclipse as Observed by —, on June 22, 1666,” written with F. Wiliughby et al. [FFRS] (Church MS); “A Fair Copy of No. 13, With Diagram on a Folded Leaf” [Read 27 June 1666]; “Letter of 30 Jan 1667/8 to Him … From the Counsell of the Royal Society … Solliciting Contribution in Scotland for Building a Colledge” (LBC.2.160); “Calendarium ecclesiasticum et astrono-micum, cum tabulis et figuris zodiaci.” In the folding form, of the first half of the fifteenth century, on vellum. The homo signorum and the homo venarum appear to be deficient. Presented by Moray (Church MS); Murray to R. Boyle, 15 Jul. 1672 (BL4.75); “Experiments Propounded by Sir Robert Moray and Recommended to Dr. Power” (RBC.1.167); no origin, undated, to the grand duke of Tuscany (MM.3.119), credited to Moray; “Sounding Between Portsmouth & the Isle of Wight With the Wooden Globe & Lead,” written with Brouncker (Church MS).

Some of the papers were published in the Philosophical Transactions of the Royal Society without clear authorship; e.g., Moray suggested several experiments to Newton in “Some Experiments Propos’d in Relation to Mr. Newton’s Theory of Light, Printed in Numb. 80; Together With the Observations Made Thereupon by the Author of That Theory; Communicated in a Letter of His From Cam-bridge, April 13. 1672,” 7 (1672), 4059–4062. Although Moray is not cited as the author of the paper, Newton in a letter to Oldenburg indicates that he was (Rigaud, II, 324).

Most sources relating to his career in the French army are in the archives at Paris. For MS collections see Robertson (above), pp. 201–203; sources of a political nature include Osmund Airy, ed., Lauderdale Papers, 3 vols. (Westminster, 1884–1885), passim; J. G. Fotheringham, ed., The Diplomatic Correspondence of Jean de Montereul and the Brothers de Bellièvre, 2 vols. (Edinburgh, 1898–1899), passim; and Samuel R. Gardiner, ed., The Hamilton Papers; Being Selections From Original Letters in the Possession of His Grace the Duke of Hamilton and Brandon, Relating to the Years 1638–1650 (Westminster, 1880).

oxford
views updated
Moray, Sir Robert (c.1609–73). Moray, the son of a Scottish laird from Perthshire, was soldier, scientist, and politician. He spent many years in the French service, acting as go-between for Charles I, who knighted him in 1643. He took part in Glencairn's rising in Scotland in 1654 before returning again to the continent, where he practised music and chemistry. After the Restoration, Moray took a prominent part in the foundation of the Royal Society, acted as president, and looked after Charles II's private laboratory in Whitehall. Until 1670 he also collaborated with Lauderdale in the government of Scotland where, sympathetic towards the presbyterians, he exercised a moderating influence on government policy. But most of his time was spent in London at the court. Burnet, Pepys, and Evelyn wrote of him with affection and respect, and John Aubrey paid a glowing tribute to his disinterestedness: ‘he was far from the rough humour of the camp breeding, for he was a person the most obliging about the court, and the only man that would doe a kindnesse gratis upon an account of friendship … as free from covetousness as a Carthusian.’