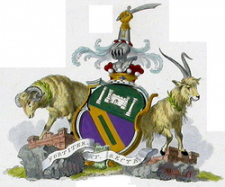 oxford
views updated
Heathfield, George Augustus Eliott, 1st Baron (1717–90). Eliott, a younger son of a Scottish baronet of Roxburghshire, attended the University of Leiden and served in the Prussian army before joining the Horse Grenadiers, his uncle's regiment, in 1739. He fought at Dettingen and Fontenoy, and in the Seven Years War served in Germany, and was second in command at the capture of Havana in 1763. He was promoted lieutenant-general in 1765, served as commander-in-chief in Ireland 1774–5, and became general 1778. In 1776 he was appointed governor of Gibraltar, a post he held for the rest of his life. During the War of American Independence, Gibraltar resisted a four-year siege, 1779–83, against Spanish and French forces. Eliott inflicted enormous losses on the Spanish floating batteries in September 1782 with red-hot shot and the following month Howe raised the blockade. Eliott was knighted in 1783 and given his barony in 1787. Reynolds's magnificent portrait was painted in 1788.