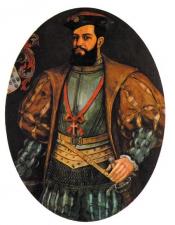 Martim Afonso de Sousa (ca. 1500-1564) was a Portuguese colonizer and viceroy who founded the first permanent Portuguese settlement in South America, and served as viceroy of India.

The exact date of the birth of Martim Afonso de Sousa remains unknown, but some authorities arbitrarily give 1500. He was born in Vila Viçosa and grew up closely attached to the royal court. Disturbed by increasing foreign commerce along the Brazilian coast, Portugal's King João III decided to send an expedition to his South American colony to drive away the interlopers, further explore the coast, and establish at least one permanent settlement. In 1530 he selected Martim Afonso de Sousa and delegated extensive powers to him as "chief captain of the fleet and lands" of Brazil. Under the command of Sousa, a fleet of five ships embarked for Brazil in December 1530. After reconnoitering the coast from Pernambuco to the Rio de la Plata, Sousa founded the settlement of São Vicente in 1532. As the official chronicler of the expedition, Pero Lopes de Sousa, put it, "To all of us this land seemed so good that Captain Martim de Sousa decided to settle it."

The Portuguese built a chapel, a small governmental headquarters, two tiny fortresses, and quarters for the men. Capt. Sousa appointed municipal officers and distributed the land with lavish generosity. Wheat, grape vines, and sugarcane were planted; cattle were introduced; and the first sugar mill was put into operation in 1533. On the plateau high above São Vicente, Sousa established a second small settlement, Piratininga, near present-day São Paulo. Returning to Portugal in 1533, Sousa left behind a viable colony. The King rewarded him with extensive lands in southern Brazil, including the captaincy of São Vicente. Sousa never returned to Brazil, but his captaincy continued to prosper.

In 1534 the King dispatched Sousa to the East as the chief captain of a new expedition. He spent 5 years fighting Portugal's rivals and enemies along the Indian coast before sailing back to Lisbon. In 1542 the Crown appointed him viceroy of India, a post he held for 3 years, the customary tour of duty. Once again he made the long sea voyage back to Lisbon, this time to occupy a post on the Council of State. Few facts are known about the last decades of his life. He died on July 21, 1564, in Lisbon.

The most extensive source in English for material on Sousa is Elaine Sanceau, Captains of Brazil (Porto, Portugal, 1965). See also Alexander Marchant, From Barter to Slavery: The Economic Relations of Portuguese and Indians in the Settlement of Brazil, 1500-1580 (1942), No. 1, Series 60, in the Johns Hopkins University Studies in Historical and Political Science. For general background consult João P. Calogeras, A History of Brazil (trans. 1939), and Pollie E. Poppino, Brazil: The Land and People (1968). □

Afonso De Albuquerque , Albuquerque, Afonso de Albuquerque, Afonso de 1453–1515 Afonso d'Albuquerque, known as "the Great," was born in Alhandra, near Lisbon, Portugal, and… Vasco Nunez De Balboa , 1475-1519 Spanish Conquistador Vasco Núñez de Balboa was a Spanish conquistador who explored Central America, was the first to establish a permanent… Tupi , Tupi Tupi, a linguistic trunk composed of seven distinct language branches, among which the Tupi-Guarani family is by far the most widespread. Tupi s… Abraham Isaac Kook , Gush Emunim GUSH EMUNIM ("The Bloc of the Faithful"), a spiritual-political movement established for the purpose of implementing its belief that the… Mem De Sa , Mem de Sá Mem de Sá Mem de Sá (1504-1572) was a Portuguese jurist and a governor general of Brazil who served from 1558 to 1572 and helped to bring a… Atacama Desert , Atacama Desert Atacama Desert, interior region of southern Bolivia, northern Chile, and northwestern Argentina, 8,250-13,200 feet in elevation. Consi…