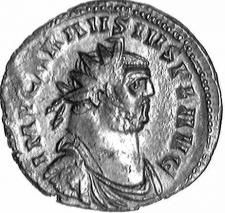 oxford
views updated
Carausius. Roman imperial usurper, ad 286–93. In 286 Carausius revolted against official Roman command in advance of disciplinary action by the western Augustus (emperor) Maximian. Appointed to command patrols of the English Channel, which was plagued by barbarians, Carausius had exploited the booty profits too successfully for Maximian's liking, and Maximian sentenced him to death. Carausius declared himself emperor and controlled Britain and north-western Gaul 286–93. In 293 Constantius Chlorus ( Maximian's Caesar or deputy) made military gains against Carausius in Gaul and captured the great fleet base at Boulogne. Carausius was assassinated by his finance minister Allectus.