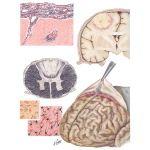 Tabes dorsalis is a late manifestation of untreated syphilis and is characterized by a triad of clinical symptoms namely gait unsteadiness, lightning pains and urinary incontinence. It occurs due to a slow and progressive degeneration of nerve cells and fibers in spinal cord. It is one of the forms of tertiary syphilis or neurosyphilis.

The first description of the disorder was given by a French neurologist , Guillame Duchenne in 1858 who called it l'ataxie locomotrice progressive (progressive locomotor ataxia ). But the word tabes dorsalis was coined in 1836 even before the actual cause was discovered. Tabes in Latin means "decay" or "shriveling"; dorsalis means "of the back." These indicate the location and type of damage occurring in the spinal cord. It is also called "spinal syphilis" or "syphilitic myelopathy."

Syphilis was widespread in the early part of the twentieth century but there has been a ten-fold decrease in incidence since then due to better screening measures and effective antibiotic therapy. Therefore classic, full blown forms of tabes dorsalis are seldom seen in the twenty-first century.

The Center for Disease Control (CDC) reports the annual incidence of syphilis and from this, an estimate of the number of tabes dorsalis cases can be made. In 2001, there was around 2.2 per 100,000 population, or 7,000 new cases of syphilis reported. Three to seven percent of untreated patients develop neurosyphilis, of whom about 5% develop tabes dorsalis. Normally, fifteen or twenty years elapse after the initial syphilis infection, but this is shortened in patients with AIDS . Tabes dorsalis is more common in middle-aged males, homosexuals and inner city population in New York, San Francisco and the southern part of the United States.

Syphilis is a sexually transmitted disease caused by a bacteria named Treponema pallidum. During initial infection, the bacteria spread through the blood stream into remote sites like the brain and spinal cord, but remain silent in these areas. If proper treatment is not instituted, neurological disorders arise about a decade later and is called neurosyphilis. Damage to the spinal cord substance due to syphilis is called tabes dorsalis.

Inflammation occurs in the dorsal columns of the spinal cord. These columns are in the portion of the spinal cord closest to the back and have nerve fibers that carry sensory information like deep pain and position sense (proprioception) from the legs and arms to the brain. As a result of this, the nerve fibers lose their insulation and start atrophying. The pathological process starts in the lower-most portion of the spinal cord that receives information from the legs and spreads upwards. The inflammation can also involve other nerves that control vision, hearing, eye movements, bladder and bowel.

In the twenty-first century, mostly atypical cases of tabes dorsalis are seen due to previous partial antibiotic treatment. Much of the description of the classic disease comes from scientific articles and patient reports more than fifty years ago. The earliest and probably the most troublesome symptom is pain. This is often described as "stabbing" or "lightning-like" and is quite intense. It appears very suddenly, usually in the legs, spreads rapidly to other parts of the body and then disappears quickly. Unfortunately, this cycle can repeat itself several times a day and for days together, making the patient's life miserable. They also experience uncomfortable abnormal sensations or "paresthesias," like tingling, burning, or coldness. Later the feet become progressively numb. "Visceral crisis" develops either spontaneously or after stress in about 15% of patients due to autonomic nerve dysfunction. These episodes are frightening and severe but rarely life threatening. They consist of excruciating abdominal pain and vomiting or vocal cord spasm or burning rectal pain.

A characteristic unsteady gait called "sensory ataxia" develops. Due to degeneration of nerves that carry position sense from the legs, patients are unable to judge the position of their feet in relation to the ground while walking. They become very unsteady especially while walking in a straight line, on uneven surfaces, or while turning suddenly. This becomes dramatically accentuated in the dark or while closing the eyes as visual compensation is removed. A person with tabes dorsalis walks stooped forward with a wide based "high-stepping" gait and eyes glued to the ground in order to prevent falling. With progression of the disease, they become unable to walk although muscle strength is intact.

Diagnosis is mainly clinical. Syphilis has often been called "the great mimicker" and requires an astute physician to diagnose. There are three steps in diagnosis.

Secondly, it has to be differentiated from other disorders that can present similarly. This is done with the help of CT scans , MRI scans, spinal tap and certain screening blood tests. The most common screening blood test is called the Venereal Disease Research Laboratory (VDRL) test. This measures the level of certain antibodies that are elevated in the blood in syphilis. It reflects disease activity and therefore may be falsely negative in very late "burnt out" cases of tabes. On the other hand, it maybe falsely elevated in a host of other medical conditions. Therefore, it is a sensitive but not a very specific test. It is only a screening test and any positive result has to be confirmed with other blood tests. The cerebrospinal fluid (CSF) circulates around the brain and spinal cord and reflects underlying inflammation. In tabes, the white cell count and protein level in the CSF are elevated. A positive VDRL test in the CSF is a definitive diagnostic test for tabes dorsalis.

Thirdly, confirmatory tests should be done on the spinal fluid and blood. There are two confirmatory tests for syphilis, namely the Fluorescent Treponemal Antibody Absorption (FTA-ABS) and Micro Hemagglutination of Treponema Pallidum (MHA-TP). These detect very specific antibodies in the blood that are present when the person has syphilis and not otherwise. FTA-ABS in the CSF is a very sensitive test and a negative result virtually rules out tabes dorsalis. It is mandatory that all patients with syphilis undergo testing for HIV.

Elevated white cells and protein in the CSF with a positive CSF VDRL test in a person with appropriate clinical findings is diagnostic for tabes dorsalis.

The team consists of a neurologist, an internist, an infectious disease specialist, psychiatrist and sometimes a pain management specialist. They will closely interact with physical therapists and occupational therapists.

Treatment is aimed at curing the infection and hopefully halting the progression of neurologic damage. Treatment is unfortunately limited in reversing the damage already done and the degree of recovery depends on the extent of damage when therapy is started. Appropriate treatment however does reduce future nerve damage, reduces symptoms and normalizes the CSF abnormalities.

The CDC of the United States Department of Health and Human Services has extensive guidelines for treatment of tabes. It recommends antibiotic treatment with intravenous aqueous crystalline penicillin G for two weeks. If the patient has penicillin allergy, he should be desensitized first before treatment. Otherwise, the antibiotic Ceftriaxone can be used as an alternative but the adequacy of this has not been fully approved by the CDC. Serum VDRL titers are checked every three months till they start declining. CSF is checked at six and twelve months and if still abnormal, rechecked at two years. Re-treatment is recommended if neurological damage progresses, if CSF white cell count does not normalize in six months, VDRL titers do not decline or show a four-fold increase and if the first course of treatment was suboptimal. Symptomatic analgesic treatment is given for pain. This can range from simple over the counter medications like aspirin or Tylenol or more potent analgesics like narcotics. Certain anti-seizure medications like Phenytoin, Carbamazepine and Valproic acid are efficacious in treating resistant pain. If patients become demented and have behavioral issues, anti-psychotic medications can be given.

Primary and secondary prevention of syphilis is important to prevent development of tabes dorsalis. Safe sex (using a condom) is a way of primary prevention. Screening, detection and treatment of early syphilis are measures of secondary prevention. Sexually active people should consult a physician about any rash or sore in the genital area. Those who have been treated for another sexually transmitted infection like gonorrhea, should be tested for syphilis and HIV. Persons who have been exposed sexually to another person who has syphilis of any stage should be clinically evaluated, undergo testing and even be presumptively treated in certain instances.

Assistance or supervision may be needed for self-care activities like eating, showering, dressing etc. Patients may require assistive devices like a cane, walker or a wheelchair to overcome gait difficulty. Diapers or urinary catheters are used for urinary incontinence. Surgery can help replace joints destroyed by arthritis. Patients need a good bowel regimen to avoid constipation, which can trigger a visceral crisis. Since this is a chronic illness, respite care should be provided for the caregivers.

There is no trial open for tabes dorsalis, but there is an ongoing phase III multicenter randomized trial as of early 2004 funded by the National Institute of Allergy and Infectious Diseases (NIAID) for assessing the antibiotic Azithromycin given orally in treatment of primary, secondary or early latent syphilis. The NIAID and the National Institute of Neurological Diseases and Stroke (NINDS) are carrying out research to develop a non-invasive test for detecting syphilis and to develop a vaccine. The genome of Treponema pallidum has been sequenced through NIAID-funded research. This is a wealth of information that will hopefully lead to clues to better diagnose, treat and vaccinate against syphilis.

Tabes dorsalis is a chronic, annoying and incapacitating disease but is per se seldom fatal. If tabes dorsalis is diagnosed in its very early stages, fairly good recovery is possible. Pain is quite bothersome and has a serious impact on quality of life. Ataxia, dementia and blindness are incapacitating. Death usually occurs due to rupture of enlarged blood vessels and damage to heart valves, which occur as a part of tertiary syphilis. Rarely, a urinary infection will lead to sepsis and death.

Tabes dorsalis can affect thinking and memory and all patients must have neuropsychological testing for dementia. They will need to get legal advice for estate and financial planning and their wishes for future medical care.