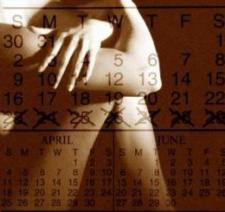 Dysfunctional uterine bleeding (DUB) is a disorder that occurs most frequently in women at the beginning and end of their reproductive lives. About half the cases occur in women over 45 years of age, and about one fifth occur in women under age 20.

Dysfunctional uterine bleeding is diagnosed when other causes of uterine bleeding have been eliminated. Failure of the ovary to release an egg during the menstrual cycle occurs in about 70% of women with DUB. This is probably related to a hormonal imbalance.

DUB is common in women who have polycystic ovary syndrome (cysts on the ovaries). Women who are on dialysis may also have heavy or prolonged periods. So do some women who use an intrauterine device (IUD ) for birth control.

DUB is similar to several other types of uterine bleeding disorders and sometimes overlaps these conditions.

Menorrhagia, sometimes called hypermenorrhea, is another term for abnormally long, heavy periods. This type of period can be a symptom of DUB, or many other diseases or disorders. In menorrhagia, menstrual periods occur regularly, but last more than seven days, and blood loss exceeds 3 oz (88.7 ml). Passing blood clots is common. Between 15-20% of healthy women experience debilitating menorrhagia that interferes with their normal activities. Menorrhagia may or may not signify a serious underlying problem.

Metrorrhagia is bleeding between menstrual periods. Bleeding is heavy and irregular as opposed to ovulatory spotting which is light bleeding, in mid-cycle, at the time of ovulation.

Polymenorrhea describes the condition of having too frequent periods. Periods occur more often than every 21 days, and ovulation usually does not occur during the cycle.

Dysfunctional uterine bleeding often occurs when the endometrium, or lining of the uterus, is stimulated to grow by the hormone estrogen. When exposure to estrogen is extended, or not balanced by the presence of progesterone, the endometrium continues to grow until it outgrows its blood supply. Then it sloughs off, causing irregular bleeding. If the bleeding is heavy enough and frequent enough, anemia can result.

Menorrhagia is representative of DUB. It is caused by many conditions including some outside the reproductive system. Causes of menorrhagia include:

Diagnosis of any menstrual irregularity begins with the patient herself. The doctor will ask for a detailed description of the problem, and take a history of how long it has existed, and any patterns the patient has observed. A woman can assist the doctor in diagnosing the cause of abnormal uterine bleeding by keeping a record of the time, frequency, length, and quantity of bleeding. She should also tell the doctor about any illnesses, including long-standing conditions, like diabetes mellitus. The doctor will also inquire about sexual activity, use of contraceptives, current medications, and past surgical procedures.

After taking the woman's history, the gynecologist or family practitioner does a pelvic examination and Pap smear. To rule out specific causes of abnormal bleeding, the doctor may also do a pregnancy test and blood tests to check the level of thyroid hormone. Based on the initial test results, the doctor may want to do tests to determine the level of other hormones that play a role in reproduction. A test of blood clotting time and an adrenal function test are also commonly done.

Imaging tests are important diagnostic tools for evaluating abnormal uterine bleeding. Ultrasound examination of the pelvic and abdominal area is used to help locate uterine fibroids, also called uterine leiomyoma, a type of tumor. Visual examination through hysterscopy—where a camera inside a thin tube is inserted directly into the uterus so that the doctor can see the uterine lining—is also used to assess the condition of the uterus.

Hystersalpingography can help outline endometrial polyps and fibroids and help detect endometrial cancer. In this procedure an x ray is taken after contrast media has been injected into the cervix. Magnetic resonance imaging (MRI) of the pelvic region can also be used to locate fibroids and tumors.

Endometrial biopsy (the removal and examination of endometrial tissue) is the most important testing procedure. It allows the doctor to sample small areas of the uterine lining, while cervical biopsy allows the cervix to be sampled. Tissues are then examined for any abnormalities.

Dilation and curettage (D & C), once common is rarely done today for diagnosis of DUB. It is done while the patient is under either general or regional anesthesia. Women over 30 are more likely to need a D & C, as part of the diagnostic procedure, than younger women.

Because DUB is diagnosed by eliminating other possible disorders, diagnosis can take a long time and involve many tests and procedures. Older women are likely to need more extensive tests than adolescents because the likelihood of reproductive cancers is greater in this age group, and therefore must be definitively eliminated before treating bleeding symptoms.

Treatment of DUB depends on the cause of the bleeding and the age of the patient. When the underlying cause of the disorder is known, that disorder is treated. Otherwise the goal of treatment is to relieve the symptoms to a degree that uterine bleeding does not interfere with a woman's normal activities or cause anemia.

Generally the first approach to controlling DUB is to use oral contraceptives that provide a balance between the hormones estrogen and progesterone. Oral contraceptives are often very effective in adolescents and young women in their twenties. NSAIDs (nonsteroidal anti-inflammatory drugs ), like Naprosyn and Motrin, are also used to treat DUB.

When bleeding cannot be controlled by hormone treatment, surgery may be necessary. Dilation and curettage sometimes relieves the symptoms of DUB. If that fails, endometrial ablation removes the uterine lining, but preserves a woman's uterus. This procedure is sometimes be used instead of hysterectomy. However, as it affects the uterus, it can only be used when a woman has completed her childbearing years. The prescription of iron is also important to decrease the risk of enemia.

Until the 1980s, hysterectomy often was used to treat heavy uterine bleeding. Today hysterectomy is used less frequently to treat DUB, and then only after other methods of controlling the symptoms have failed. A hysterectomy leaves a woman unable to bear children, and, therefore, is limited largely to women who are unable to, or uninterested in, bearing children. Still, hysterectomy is a common treatment for long-standing DUB in women done with childbearing.

Alternative practitioners concentrate on good nutrition as a way to prevent heavy periods that are not caused by uterine fibroids, endometrial polyps, endometriosis, or cancer. Iron supplementation (100 mg per day) not only helps prevent anemia, but also appears to reduce menorrhagia in many women. Other recommended dietary supplements include vitamins A and C. Vitamin C improves capillary fragility and enhances iron uptake.

Vitamin E and bioflavonoid supplements are also recommended. Vitamin E can help reduce blood flow, and bioflavonoids help strengthen the capillaries. Vitamin K is known to play a role in clotting and is helpful in situations where heavy bleeding may be due to clotting abnormalities

Response to treatment for DUB is highly individual and is not easy to predict. The outcome depends largely on the woman's medical condition and her age. Many women, especially adolescents, are successfully treated with hormones (usually oral contraceptives). As a last resort, hysterectomy removes the source of the problem by removing the uterus, but this operation is not without risk, or the possibility of complications.

Dysfunctional uterine bleeding is not a preventable disorder.

Dilation and curettage (D & C)— A procedure performed under anesthesia during which the cervix is dilated, and tissue lining the uterus is scraped out with a metal spoon-shaped instrument or a suction tube. The procedure can be either diagnostic, or to remove polyps.

Endometrial biopsy— The removal of tissue either by suction or scraping of samples of tissue from the uterus. The cervix is not dilated. The procedure has a lower rate of diagnostic accuracy than a D & C, but can be done as an office procedure under local anesthesia.

Endometrial cancer— Cancer of the inner mucous membrane of the uterus.

Fibroids, or fibroid tumors— Fibroid tumors are non-cancerous (benign) growths in the uterus. They occur in 30-40% of women over age 40, and do not need to be removed unless they are causing symptoms that interfere with a woman's normal activities.

Hypothyroidism— A disorder in which the thyroid gland produces too little thyroid hormone causing a decrease in the rate of metabolism with associated effects on the reproductive system.

Lupus erythematosus— A chronic inflammatory disease in which inappropriate immune system reactions cause abnormalities in the blood vessels and connective tissue.

Progesterone— A hormone naturally secreted by the ovary, or manufactured synthetically, that prepares the uterus for implantation of a fertilized egg.

Prostaglandins— A group of chemicals that mediate, or determine the actions of other chemicals in the cell or body.

Pleural Biopsy , Pleural biopsy Definition The pleura is the membrane that lines the lungs and chest cavity. A pleural biopsy is the removal of pleural tissue for exa… Pheochromocytoma , Pheochromocytoma Definition Pheochromocytoma is a tumor of special cells (called chromaffin cells), most often found in the middle of the adrenal gla… Bronchoscopy , Bronchoscopy is a procedure in which a hollow, flexible tube called a bronchoscope is inserted into the airways through the nose or mouth to provide… Fibroadenoma , Definition Fibroadenomas are benign breast tumors commonly found in young women. Fibroadenoma means "a tumor composed of glandular (related to gland)… Endometriosis , Endometriosis (en-do-me-tree-O-sis) is a chronic condition in which pieces of the lining of the uterus (YOO-ter-us) become embedded in tissues outsid… Thyroidectomy , Thyroidectomy Definition Purpose Demographics Description Diagnosis/Preparation Aftercare Risks Normal results Morbidity and mortality rates Alternat…