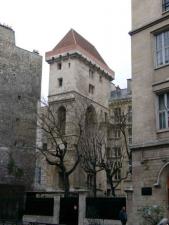 Hôtel de Bourgogne (ōtĕl´ də bŏŏrgô´nyə), first theater in Paris. It was built in 1548 by the Confraternity of the Passion, the Paris actors' monopoly. Its first days were marred by a ban on the presentation of religious dramas. The actors carried on in spite of their restricted repertory, which consisted of farces and secular plays. The audiences dwindled, and the players were forced to lease the theater to traveling companies until 1610, when the theater's first permanent company, called the King's Players, was established by Valleran-Lecomte (fl. 1590–1613). In 1634 another company, whose members included the tragedian Montdory and the comedian Jodelet, was established at the Théâtre du Marais, and competition between the two companies arose. However, after the retirement of Montdory, the Bourgogne reigned supreme, with actors such as Bellerose (c.1600–1670), Floridor (1608–72), and Montfleury (1600–1667) setting the style of the day. The arrival in 1658 of Molière interrupted this reign. The Théâtre du Marais combined with the Molière faction to challenge the Bourgogne hegemony. In 1680, however, the companies merged to form the Comédie Française.