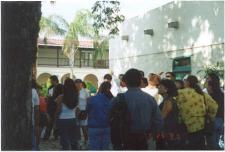 oxford
views updated
INTERNATIONAL LANGUAGE, sometimes international auxiliary language. A language, natural or artificial, that is used for general communication among the nations of the world: ‘In the four centuries since the time of Shakespeare, English has changed from a relatively unimportant European language with perhaps four million speakers into an international language used in every continent by approximately eight hundred million people’ ( Loreto Todd & Ian Hancock, International English Usage, 1986); ‘The success of English in its function as an international auxiliary language has often been regarded as a measure of its adequacy for the job’ (Manfred Görlach, ‘Varietas Delectat’, in Nixon & Honey, An Historic Tongue, 1988). Compare LINGUA FRANCA, WORLD LANGUAGE. See BASIC ENGLISH, BROKEN ENGLISH, WORLD ENGLISH.

Pidgin , PIDGIN A term used in both a general and a technical sense for a CONTACT LANGUAGE which draws on elements from two or more languages: pidgin Portugue… Mother Tongue , MOTHER TONGUE. A general term for the language of the childhood home, learned ‘at one's mother's knee’, often used synonymously with NATIVE LANGUAGE.… Armenian Language , INDO-EUROPEAN LANGUAGES, The The language family, or family of families, of which English is a member, along with other European languages such as FR… Korean Language , Korean National language of North and South Korea. Some scholars classify it as one of the Altaic languages. It is spoken by more than 50 million peo… Esperanto , BIBLIOGRAPHY Esperanto was intended as an international language, a language of wider communication to exist beside local and national languages, and… Formal Language , formal language 1. A language with explicit and precise rules for its syntax and semantics. Examples include programming languages and also logics su…