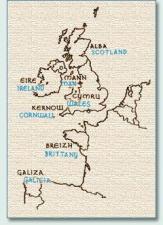 TUATHA DÉ DANANN . The Tuatha Dé Danann are the gods of pagan Ireland whose social order reflects the structure and values of early Irish society and includes poets and storytellers, kings and warriors, and practitioners of other professions and crafts. The name Tuatha Dé Danann (The Tribes or Peoples of the Goddess Danu) may originally have been simply Tuatha Dé—meaning simply the Tribes or Peoples of the Gods or of the Goddess—with Danann a later addition. Both Danu (genitive, Danann) and Anu are identified as personal names of the goddess of warfare and destruction known as the Morríghan (Great Queen or Phantom Queen), wife to Eochaidh Ollathair (Great Father), also called the Daghdha (Good God). Danu may, however, once have been a separate figure, parallel to the Welsh Dôn and Indic Danu, mother of the gods. The Tuatha Dé Danann war against and intermarry with the Fomhoire, a supernatural people associated with the sea, much as the Indic Devas and Asuras are both foes and kin.

Sources for information about the Tuatha Dé Danann include Leabhar Gabhála Éireann (The book of the taking of Ireland), a compendium of medieval prose and poetry associating legendary settlements of pre-Christian Ireland with classical and biblical chronology and presenting the gods as mortals descended from Noah. Additional sources, in which the Tuatha Dé are often explicitly called gods and goddesses, include texts whose language often reflects many chronological layers, some as early as the eighth century. These sources, including mythic and epic narratives, glossaries, and place-name lore, show elaboration and reshaping in response to cultural and political changes including those arising through Viking and Norman influences.

The Battles of Magh Tuiredh

In the pseudo-historical framework of Leabhar Gabhála Éireann the Tuatha Dé are the fifth group to invade Ireland, conquering the previous settlers in the First Battle of Magh Tuiredh. After losing an arm in that combat, the Tuatha Dé king Nuadhu (subsequently called "Silverhand" for his artificial silver arm) resigns the kingship. The Tuatha Dé form an alliance with the Fomhoire, and Nuadhu's successor is the half-Fomorian, Bres, whose rule proves oppressive. After Bres flees to his Fomhorian kinsmen for reinforcements, Nuadhu (his natural arm miraculously reattached) is reinstated and invites Lugh, who is skilled in every art, to prepare the Tuatha Dé for war. Lugh's strategies are successful, and against great odds the Fomhoire are defeated in the Second Battle of Magh Tuiredh.

The subsequent treaty brings the Tuatha Dé specialized knowledge about agriculture, offered by Bres in exchange for his life and the end of Fomhorian aggression. After a long and peaceful rule, the Tuatha Dé are defeated by the Sons of Míl, legendary ancestors of Ireland's present inhabitants. The Tuatha Dé Danann retreat into Ireland's lakes and hills and into pre-Celtic sacred mounds, such as Newgrange, and their association with magical underground dwellings (sídhe ) survives in beliefs about the fairies of later folk tradition. The Sons of Míl receive sovereignty over the surface of the land after promising that Ireland will continue to bear the names of three territorial goddesses, including Ériu (hence the name Erin).

The Second Battle of Magh Tuiredh reveals fundamental characteristics of leading members of the Tuatha Dé when Lugh, practitioner of all the arts, asks how each will help defeat the Fomhoire. As a royal surrogate, whose many arts give him a rank equal to that of a king, Lugh both coordinates the preparation for battle and leads the Tuatha Dé to victory after Nuadhu is slain. Oghma, the strongman and champion, brings prowess as a warrior. Dian Cécht, grandfather of Lugh, serves as physician to the wounded. Goibhniu ("Smith") manufactures swords and spears. Eochaidh Ollathair, the "god of druidry," is a figure of extreme sexual potency (symbolized by his three testicles) and is known for his great strength, skill with a club as well as a sword, and mastery of magical arts. Morríghan, the goddess of battle who can take the form of a crow, determines the outcome of battles and can ensure victory through verbal magic. Other Tuatha Dé women appear as experts in magical practice, in the arts of warfare, in healing, and as artisans. Lugh's muster includes many other major and minor deities, some with highly specialized skills, facilitating comparisons with other Indo-European divine societies.

Tales about the gods illustrate early Irish social institutions and beliefs and were sometimes used as leading cases in native Irish law. Members of the Tuatha Dé Danann are cited as sources of specialized professional knowledge and are recognized as initiators of cultural practices. The Daghdha's daughter Brígh (Brighid), for example, is identified as the first to keen (lament the dead) in Ireland when she mourns her son who was slain in battle. This goddess, whose name is linked to healing and smith craft as well as to poetry, is also associated with domestic animals, and the folk practices connected to the cult of Saint Brighid may reflect early beliefs about Brígh's influence over crops and herds. Her husband, Bres, is associated with agricultural and pastoral prosperity. Laws addressing legal liabilities for illness and injury are attributed to Dian Cécht, who is invoked in early healing charms; his daughter, Airmedh, was reportedly the first to recognize all healing properties of herbs. Lost laws associated with smith work and other crafts are attributed to Goibhniu and other craftsperson deities.

Sovereignty, a key theme in mythic and epic tales involving the Tuatha Dé, is often represented by the relationship between the king (divine or human) and the goddess of the land he rules. Many women of the Tuatha Dé serve as goddesses of territorial sovereignty and are associated with sacred wells and rivers and with the land of Ireland itself. Tales surrounding Édaín, who becomes the wife of Midhir of Brí Léith, explore aspects of kingship and the necessary presence of the queen—whether she is seen as divine or as a symbol of the sovereignty of the land. Midhir woos Édaín through several reincarnations and finally reclaims her from her mortal spouse Eochaidh Airemh, king of Ireland. Interaction between the gods and human society often occurs when sovereignty is in jeopardy. For example, in the tragic destruction of Conaire Mór, a king descended from Édaín, the people of the sídhe surround him at the time of his death.

Mac Neill, Máire. The Festival of Lughnasa. 2 vols., 2d. ed. Dublin, 1982. Provides an extensive discussion of both learned and popular literary sources related to Lugh and details folk customs associated with the celebration of Lughnasa.

Rees, Alwyn, and Brinley Rees. Celtic Heritage: Ancient Tradition in Ireland and Wales. London, 1961. Far-reaching and ahead of its time, this work explores the range of Celtic mythic tradition in the Indo-European context, including references to the work of Georges Dumézil, with exhaustive notes that provide access to both specialist studies and more general works.

oxford
views updated
Tuatha Dé Danann in Irish mythology, the members of an ancient race said to have inhabited Ireland before the historical Irish. Formerly believed to have been a real people, they are credited with the possession of magical powers and great wisdom. The name is Irish, literally ‘people of the goddess Danann’.