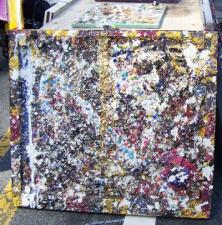 oxford
views updated
abstract art Art in which recognizable objects are reduced to schematic marks. Although abstraction was evident in the impressionist, neo- and post-impressionist movements of the late 19th century, a separate identity did not become established until the early 20th century. Its most radical form is called non-objective or non-iconic art. In this, the artist creates marks, signs or three-dimensional constructions that have no connection with images or objects in the visible world. There are two main types of non-objective art: expressionist, which is fundamentally emotional, spontaneous and personal; and geometrical, which works from the premise that geometry is the only discipline precise and universal enough to express our intellectual and emotional longings. Art historians often credit Wassily Kandinsky with being the first to explore expressionist abstraction in c.1910. Kandinsky inspired the Blaue Reiter group and helped to pave the way towards abstract expressionism, action painting, and Tachism. Geometrical abstraction found (c.1913) its most adept, early exponents in Russia. The pioneers included Kasimir Malevich, who invented suprematism, and El Lissitzky, a leading proponent of constructivism. The French Section d'Or worked in parallel to the Russians. Others who provided landmarks in geometrical abstraction include Piet Mondrian, Naum Gabo, and Ben Nicholson; influential movements include De Stijl and concrete art. See also expressionism; Kupka, František