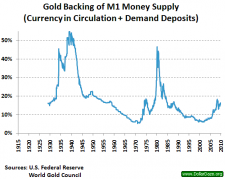 The gold standard is a monetary standard that ties a unit of currency, or money, to a stated amount of gold. Under this system, both banks and the government stand ready to redeem their note and deposit liabilities in gold at the stipulated rate. In September 1931 the United Kingdom abandoned the gold standard, and many countries followed. The United States held on to the gold standard until 1933, when both foreign and domestic demand for gold led to runs on U.S. banks (with depositors and note-holders rushing to cash in their assets for gold). The fear was that a large number of banks would fail due to insufficient gold to cover demand, and that the U.S. official gold stock would be depleted. This economic danger occurred just as President Herbert Hoover's term was ending and Franklin Delano Roosevelt's had not yet begun. Moreover, there was no cooperation between the president and president-elect. Rumors were spreading that the new president might terminate U.S. adherence to the gold standard. While this would be the most obvious policy response to the problem, the rumors worsened the runs on banks. (An end to the gold standard would mean that gold would no longer be available; the public wanted to get gold while it could.) To solve the problem, abandonment of the gold standard had to be done quickly. Roosevelt took office on March 4, 1933, and the process of taking the U.S. off the gold standard began three days later, and culminated with the Gold Reserve Act of 1934 (P.L. 73-87, 48 Stat. 337).

To deal with the economic crisis, on March 6 President Roosevelt declared a national bank holiday until March 9 and specifically forbade banks from paying

out any gold coin or bullion (gold that is not yet formed into coin). Although it was peacetime, he claimed authority for this proclamation under the wartime Trading with the Enemy Act of 1917. Some doubted that his action was legal. Also on March 6, the Treasury Department stopped transacting in gold or gold certificates (currency representing gold deposited with the Treasury). These actions suspended the gold standard but did not formally end it.

In special session called by the president, Congress passed the Emergency Banking Relief Act on March 9. This act established that the presidential powers to regulate transactions in foreign exchange, gold, silver, and currency under the 1917 act applied to any emergency, thus eliminating any doubts as to the legality of Roosevelt's actions of March 6. The Emergency Banking Relief Act also authorized the secretary of the treasury, at his discretion, to require the delivery to the Treasury of all gold coin, bullion, and certificates. Now claiming authorization under the new act, on March 9 Roosevelt extended the measures of March 6 through March 12 (a Sunday).

On March 10 the president issued an executive order authorizing the reopening of banks but prohibiting all gold payments by banks and other financial institutions (except under license by the secretary of the treasury). On April 5, stating authority under the acts of 1917 and 1933, Roosevelt required that all bank and other owners of gold coin, bullion, or certificates deliver all present and future holdings, with minor exceptions, to a Federal Reserve Bank (U.S. central bank institution) directly or via commercial banks. This was the beginning of nationalization (the process of government becoming the sole owner and holder of gold), with payment at face value ($20.67 per fine ounce, where "fine" denotes pure gold and the "ounce" is slightly greater than the customary measure. See the Official Dollar Price of Gold table above).

On August 29, by executive order, the secretary of the treasury was to receive all newly mined gold of domestic origin. On August 28, by another executive order, anyone other than a Federal Reserve Bank was forbidden from acquiring or holding gold in the United States or exporting gold (except under license). Finally, on December 28, 1933, the secretary of the treasury ordered that all gold be delivered to it at the official price of $20.67 per ounce. The process of nationalization of gold was complete.

FURTHER LEGISLATION ON COINAGE AND CURRENCY

Other legislation at this time contributed to the termination of the gold standard. The Agricultural Adjustment Act of May 12, 1933, included the Thomas Amendment (named for its sponsor, Senator Elmer Thomas), which had two pertinent provisions. First, all U.S. coins and currencies were made full legal tender (money for payment of an obligation in any amount). This meant in particular that silver coins had the same status as gold. Second, the president was given authority to fix the weight of the gold dollar to stabilize domestic prices or protect foreign commerce. This was an unprecedented transfer of congressional power over coinage and currency to the president. However, the present weight of the dollar could not be reduced by more than 50 percent. This meant that the price of gold could be set no higher than $41.34 per ounce.

The Gold Reserve Act of January 30, 1934, now enters the picture. The president had specifically requested this legislation to end the coinage of gold. All gold coin was to be withdrawn from circulation and formed into bars. Redemption of any U.S. currency in gold was forbidden. Thus the gold standard was legally terminated. Also, a provision supplementing the Thomas Amendment stated that the weight of the gold dollar could not be fixed at more than 60 percent of its present weight. This meant that the price of gold could be set at no less than $34.45 per ounce.

The series of acts and proclamations over 1933 to 1934 had several effects. First, there was a large inflow of gold into the United States, in part because of the fixed, high price of gold. Second, the Treasury made a huge profit—almost $3 billion—by acquiring gold at $20.67 prior to its revaluation to $35.00. Third, the United States readopted the gold standard, but of a limited kind. From January 31, 1934, to August 15, 1971, the Treasury purchased gold from all sellers at $34.9125, but sold gold only to foreign monetary authorities and licensed industrial users at $36.0875. However, from 1973 onward, the official gold price has significance only for valuation of the U.S. official gold stock. Fourth, with holdings of gold forbidden to U.S. residents, Americans could not readily invest in the metal or speculate on the gold price. Removal of all restrictions on private ownership of gold did not occur until December 31, 1974.

Officer, Lawrence H. "What Was the Price of Gold Then? Importance, Measurement, and History." EH.Net. <http://www.eh.net/hmit/goldprice/Interpretation.pdf>.

GOLD RESERVE ACT. In response to the Great Depression, and at the request of President Franklin D. Roosevelt, Congress passed the Gold Reserve Act on 30 January 1934; the measure nationalized all gold by ordering the Federal Reserve banks to turn over their supply to the U.S. Treasury. In return the banks received gold certificates to be used as reserves against deposits and Federal Reserve notes. The act also authorized the president to devalue the gold dollar so that it would have no more than 60 percent of its existing weight. Under this authority the president, on 31 January 1934, fixed the value of the gold dollar at 59.06 cents.

Nome , Nome •brome, chrome, comb, Crome, dome, foam, gnome, holm, Holme, hom, home, Jerome, loam, Nome, ohm, om, roam, Rome, tome •Guillaume • biome • Beerb… Devaluation , DEVALUATION, a downward adjustment of the price of a currency in terms of other currencies, in a system in which each currency has a gold par value.… Gold Standard , The end of World War I triggered a heartfelt desire across much of the world to make a new world. But when it came to economics, it was a different s… Varna , Varna Varna is a fifth millennium B.C. cemetery located on the Bulgarian Black Sea coast. Excavated in the 1970s and 1980s by Ivan Ivanov of the Varn… Kalgoorlie , Kalgoorlie a gold-mining town in Western Australia. Gold was discovered there in 1887, leading to a gold rush in the 1890s. Gold Rush , Sources Sutter’s Mill. On 24 January 1848 the American James Marshall discovered gold at John Sutter’s mill in northern California. This strike set o…