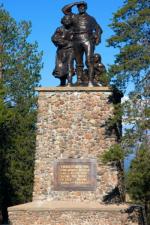 In the fever for westward expansion in the late 1840s, the disastrous journey of the Donner Party is an example of some of the nightmares faced by early pioneers on the rough journey west.

In April 1846, brothers George and Jacob Donner, prosperous farmers in their sixties, loaded their families and belongings into six wagons to move to California . Other families from their region joined them. In all, seventy-two wagons started out from Springfield, Illinois , on their way to the Oregon Trail , a 2,000-mile route west from Missouri to Oregon , with a connecting trail to California. By the time the caravan (group of wagons) reached Independence, Missouri, it included almost three hundred wagons. George Donner was elected captain of a caravan of about forty wagons.

The Donner Party started out with the same hopes that drove most westward pioneers—hopes for land, opportunity, and a better life in the West. Unfortunately, none of the members of the party had experience in traveling in the wilderness. The Oregon Trail was still new in 1846, and many parts of the route were poorly marked. There were few guides and little published information for travelers to rely on.

Party splits off from the main trail

Trouble did not begin until July 1846, when the Donner Party wagons crossed into Wyoming . There, the pioneers discussed taking a shortcut called the Hastings Cutoff, which had been mentioned in The Emigrants’ Guide to Oregon and California, by Lansford Hastings, one of the few guides for travelers on the trail. Part of the group opted to take the main trail, but the Donner families and eighty-seven others decided to proceed to the shortcut, splitting from the rest of the group at Fort Bridger, Wyoming, on July 31.

From the start, the pioneers faced great difficulties on the new route. For part of the journey they were forced to cut a passage for the wagons through dense woods. Later, they had to cross the Great Salt Lake Desert, a dry region of northwestern Utah covering 4,000 square miles. In the desert, many of the pack animals died of thirst and exhaustion.

The wagons reached the eastern slopes of the Sierra Nevada in mid-October, very late in the season to make a dangerous mountain crossing. The group was worn out and low on food. With winter snows expected any day, they decided to rest for a week before starting over the mountains.

By the end of October, most of the wagons reached the shores of Truckee Lake (now Donner Lake) in northern California. Looming above at 7,088 feet were the Sierra Nevada Mountains and the narrow, rocky passage now known as Donner Pass. The pioneers knew that if they made it up the steep eastern side of the mountains and through the pass, they could proceed down the easier slope of the western side to Sutter's Fort in the Great Central Valley of California in a few days. But they had arrived too late. Just a day's journey from the pass, the pioneers watched as heavy snow began to fall.

In repeated attempts to reach the pass, the Donner Party's wagons failed to make it through the deep snow. There was no choice but to return to the lake and set up a winter camp. The weather made each day a struggle for survival. Snow drifted as high as twenty feet. The lake was frozen. Food supplies were soon gone, and hunting generally failed to provide any food. Many members of the group were dying. Survivors began to eat boiled animal hides because there was nothing else. Finally, in desperation, some resorted to eating the flesh from the bodies of their dead fellow travelers.

In a desperate attempt to get help, on December 16 fifteen of the strongest survivors set out on foot for Sutter's Fort. The group consisted of five women and ten men, including two Native American guides. By Christmas Day, the travelers had been without food for four days. They knew that if any of them were to reach civilization, one of them must die to provide food for the others. They drew lots but then could not carry through the plan to kill one of their members. Two days later, after another snowstorm had blanketed them, they found that four of their members had died. The survivors then stripped, roasted, and ate the flesh of the dead and tried to regain their strength. As they pressed on, the two Native American guides collapsed on the trail—they had refused to eat the human meat. The survivors shot and ate them.

On January 10, 1847, the seven remaining members of the rescue party—five women and two men—at last reached civilization. In mid-February, rescuers were finally able to cross the mountains to reach the survivors of the Donner Party. Of the eighty-seven members, only forty-five had survived. At the campsite, pieces of human bodies were visible, a grim reminder of the Donner Party's desperate measures for survival.

DONNER PARTY. The Donner party, setting out from Illinois, was among the thousands of people who attempted to cross the plains to California and Oregon in 1846. Half of the eighty-seven members of the Donner party were women and children. Poorly led, they dawdled along the way, quarreled viciously, and refused to help one another. Worse, they chose a supposed shortcut through Utah that held them up for a month. By the time they reached the Sierra it was late November and snow was already falling.

When a blizzard stopped them just short of the summit, they threw up hasty shelters of wood and hides. Several attempts to force the pass failed. Finally, fifteen men and women trudged off on improvised snowshoes to bring help. Most starved to death, and their companions ate their bodies to survive. The campers on the crest of the Sierra also ate the bodies of the dead. One man finally reached a settlement in California. Heavy snow hampered rescue efforts; when the last of the Donner party was brought down from the summit in April, forty were dead. The San Francisco press sensationalized the tragedy, which passed into American myth.

Lakes , LAKES LAKES . Water, essential to life on earth, has occupied a preeminent place in religious thought and imagery, together with the land and sky. In… Communist Party , Communist party, in Russia and the Soviet Union, political party that until 1991 exercised all effective power within the Soviet Union, and, as the o… Silvestre Velez De Escalante , Silvestre Vélez de Escalante (sēlvā´strā vā´lāth dā āskälän´tā), fl. 1769–79, Spanish explorer in the American Southwest and Far West, a Franciscan m… Oregon Trail , OREGON TRAIL, one of several routes traveled in the mid-nineteenth century by pioneers seeking to settle in the western territories. Over a period of… Tenzing Norgay , Tenzing Norgay Tenzing Norgay Tenzing Norgay (1914-1986) was a well-known Nepalese mountaineer who set a record in 1952 by climbing 28,215 feet of Mt… Lake Pontchartrain , LAKE PONTCHARTRAIN is in southeastern Louisiana, five miles north of New Orleans. The lake is about 40 miles long and covers about 600 square miles.…