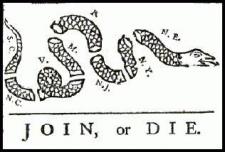 oxford
views updated
Albany Congress (1754) North American colonial conference to discuss Native American relations. Representatives from seven northern and middle colonies met Iroquois leaders and negotiated an alliance against the French. At this meeting Benjamin Franklin proposed a plan for union of the colonies, which was rejected by the colonial governments.

Plymouth Colony , PLYMOUTH COLONY (or Plantation), the second permanent English settlement in North America, was founded in 1620 by settlers including a group of relig… Decolonization , THE CAUSE OF DECOLONIZATION GENEALOGY OF THE TERM DECOLONIZATION POST-1945 HISTORICAL CONTEXTS OF DECOLONIZATION EUROPEAN EFFORTS TO REINVENT OVERSEA… Colonialism , c. 1875 The boundaries of Colonialism, like those of many literary eras, are difficult to draw. The history of Colonialism as a policy or practice go… United Kingdom. Molasses Act 1733 , MOLASSES ACT, a British law put into effect on 25 December 1733, laid prohibitive duties of six pence per gallon on molasses, nine pence per gallon o… Townshend Acts , During June and July 1767, the British parliament passed a series of four laws known as the Townshend Acts. The name came from Charles Townshend (172… Shirley Mount Hufstedler , French and Indian War FRENCH AND INDIAN WAR FRENCH AND INDIAN WAR. This was the last in a series of conflicts between Great Britain and France for do…