Merchants of the Steelyard 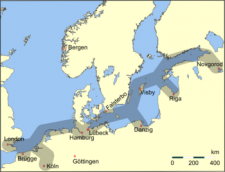 oxford
views updated
Steelyard. The Steelyard, on the site of Cannon Street station (London), was for more than three centuries the headquarters of the Hanseatic traders. They were charged with the repair and defence of Bishopsgate, but were deprived of their privileges by Elizabeth in 1598 in retaliation for restrictions placed upon English merchants in the Holy Roman empire.

Hamburg , hamburg and napoleon citizenship and politics hamburg as germany's port bibliography Hamburg, a seaport of Germany, is located where two smaller trib… Shoplifting , Shoplifting is the practice of stealing merchandise from retail establishments. Unfortunately, shoplifting is a serious and persistent problem for mo… Merchant , merchant •abeyant, mayn't •ambient, circumambient •gradient, irradiant, radiant •expedient, ingredient, mediant, obedient •valiant • salient • resili… Nantes , Nantes One of the two main Atlantic harbors of France, Nantes is situated on the River Loire about 60 kilometers from the sea. Nantes came into exist… Merchants Of The Staple , Skip to main content Merchants of the Staple sta·ple1 / ˈstāpəl/ • n. a piece of bent metal or wire pushed through something or clipped over it as a… Ismail Merchant , Merchant, Ismail Producer Ismail Merchant (1936–2005) and director James Ivory created magnificent films that were largely the result of Merchant's f…