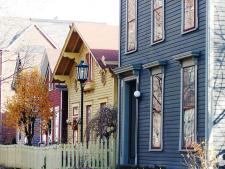 The National Historic Preservation Act (P.L. 89-665, 80 stat. 915), first passed in 1966, established the U.S. policy of preserving history, while balancing that preservation with concerns for current, efficient use of property. It was passed at a time of growing cultural awareness of the importance of historic preservation, which was heightened because the nation was undergoing significant economic and social change. It was part of the 1960s movement of urban planners and architects to makes cities and towns livable and preserve some of the character of those places. That revolution in thinking, inspired by such works as The Death and Life of Great American Cities by Jane Jacobs, emphasized a cooperation between private landowners, developers, and the federal government. The act was premised partly on the idea that urban development and the creation of highways was destroying historic buildings and was a response to other federal programs, like the Federal Highway Acts. If preservation could be accomplished best by working with landowners, rather than in opposition to them, the act could accomplish that purpose by providing economic incentives for preservation.

The act set a framework for national historic preservation policy, including a provision for a National Register of Historic Places, which had more than 76,000 listings by 2003. The register, maintained by the National Park Service, is accessible on its web site. Listing in the register is limited to properties considered "significant" in one or more aspects of American society and culture. It includes all national parks, 2,300 national historic properties designated by the Secretary of the Interior because of their importance to all Americans (like the General Motors Building in Detroit, Michigan, and the Ernest Hemingway House in Key West, Florida), and thousands of other properties nominated by local governments, organizations, and individuals because of their significance to the nation, state, or community.

To be listed, a property must meet rigorous standards, including a demonstration that the property is "of significance in American history, architecture, archeology, engineering, and culture," which is determined through "location, design, setting, materials, workmanship, feeling, and association." Moreover, the property must either be associated with "events that have made a significant contribution to the broad patterns of our history," with "the lives of persons significant in our past," be architecturally significant, or significant as an archeological site.

A property may be nominated by the State Historic Preservation Officer (SHPO) of the state where the property is located, or by the Federal Preservation Officer for federal property, or the Tribal Preservation Officer for tribal property. Often private citizens prepare the nominations for the SPHO and then the applications are reviewed by a state review board composed of professional historians, architects, archeologists, and other professionals in related fields. If the board and SPHO both approve, the nomination is sent to the National Park Service for its consideration. Throughout the process, property owners are given an opportunity to comment on the proposed designation. When the National Park Service is considering designation, it also solicits public comment.

There are four main benefits to being listed in the National Historic Register. First, it certifies the property as historically significant. Second, there must be special consideration given before the property is altered by any federally funded or assisted projects, which adds an extra level of scrutiny. Many people consider it a burden to develop listed property when federal money is being used because of a cumbersome review procedure. As a result, some property owners resist listing their property. The act's restrictions on development were further expanded in 1996 by President Clinton, who issued Executive Order 13007, which required extra precaution for any federal construction project that might interfere with a Native American sacred site.

The third benefit of listing with the National Historic Registry is that the property may be eligible for limited funding for historic preservation. Finally—and most importantly—the property might qualify for federal tax benefits for restoration. There is a twenty-percent investment tax credit for the rehabilitation of income-producing property, so the act provides both an incentive for private developers to preserve property and restricts the use of federal money to interfere with historic property.

NATIONAL TRUST FOR HISTORIC PRESERVATION. "Protecting the Irreplaceable" is the motto of the National Trust for Historic Preservation, a multifaceted organization that advocates on behalf of historic properties and districts, serves as a resource for professionals in the field, and educates the public, policy-makers, and legislators about issues related to historic preservation. The wide ranging and eclectic nature of its work becomes apparent from the array of properties the trust has accumulated since its founding in 1949—from President Woodrow Wilson's home in Washington, D.C., to the studio and home of Frank Lloyd Wright in Chicago, Illinois, to the Cooper-Molera adobe compound built by a New England sea captain in what was once Mexican California. Trust programs, including a National Main Street Center focused on revitalizing historic business districts, a community partners' program that identifies historic residential neighborhoods, and a rural heritage program that seeks to preserve historic structures, landscapes, and sites in small towns and rural communities, are no less diverse. With a staff of 300, an annual budget of more than $40 million, and 250,000 members, the National Trust for Historic Preservation is a formidable presence in contemporary American society.

When Congress passed legislation more than fifty years ago to create the National Trust for Historic Preservation, its intention was to provide a means by which historic properties could be acquired and properly cared for. The trust now owns twenty such properties, has eight field offices throughout the nation, and a preservation services fund that can support specific projects at the local level. A range of publications figure prominently in the work of the trust, with Preservation magazine—aimed at educating the public—beginning in 1952. Forum News, a bimonthly newsletter, Forum Journal, a quarterly journal, and Forum Online are designed for the preservation professional, providing venues for airing key issues, identifying resources, and offering models for solving problems. An annual Preservation Leadership Training Institute also provides experience and training for practitioners in the field. In addition to an annual meeting the trust also offers more specialized conferences such as the recent series on "Preserving the Historic Road in America," as well as other educational and organizational resources for local communities through its website at www.nationaltrust.org.

Though it received federal funds from 1966 to 1998, the trust is a nonprofit organization funded mainly through membership dues, sales, and grants. It lobbies for specific legislation and policies at the federal, state, and local level and has undertaken litigation to ensure preservation laws are enforced. "Save America's Treasures," an outgrowth of the 1998 White House Millennium initiative to protect the nation's cultural heritage, has continued as a partnership of the National Trust for Historic Preservation and the National Park Foundation and has led to the designation of several hundred preservation projects throughout the nation.

Since 1988, the trust has issued an annual list of "America's Most Endangered Historic Places," a leadership effort that, while it has had mixed success in assuring the preservation of particular buildings and sites, has created a growing public consciousness. In the late 1980s, the trust was able, for example, to convince the state of Maryland to acquire preservation easements that stopped the encroachments of developers at the site of Antietam National Battlefield Park. Similar threats to the integrity of Little Big Horn Battlefield Monument in Montana have been publicized, but the outcome remains in doubt. At Ellis Island National Monument, the trust has worked with the New York Landmarks Conservancy, the U.S. Congress, and the presidential Save America's Treasures effort to save many historic buildings from deterioration. With trust publicity the town of Bennington, Vermont, was able to persuade a Wal-Mart store to depart from its typical "big box" retail center outside of downtown, and instead use an older building in the downtown area. In Downey, California, the trust helped convince the McDonald's Corporation not to demolish its oldest surviving restaurant. Similarly the city of Dallas, Texas, has provided tax incentives for developers to rehabilitate, rather than demolish, historic properties. Central High School, once a center of desegregation efforts in Little Rock, Arkansas, was badly in need of rehabilitation when the trust placed it on the endangered list in 1996, but its prospects have brightened as President Clinton signed legislation making it a National Historic Site two years later. These and dozens of other trust-led efforts have inspired thousands of citizens to take seriously the historic places in their communities and to fight to save them.

Hosmer, Charles B., Jr. Preservation Comes of Age: From Williamsburg to the National Trust, 1926–1949. Charlottesville: University Press of Virginia, 1981.

Larceny , Larceny The unauthorized taking and removal of thepersonal propertyof another by an individual who intends to permanently deprive the owner of it; a… Personal Property , Everything that is the subject of ownership that does not come under the denomination of real property; any right or interest that an individual has… Reversion , re·ver·sion / riˈvərzhən/ • n. 1. a return to a previous state, practice, or belief: there was some reversion to polytheism | [in sing.] a reversion… Receiver , RECEIVER An archaic term, used in common law andcivil lawcountries, to designate an individual who holds and conceals stolen goods for thieves. Curre… Lien , LIEN LIEN (Heb. שִׁעְבּוּד נְכָסִים, Shibud Nekhasim). The Concept Jewish law enables the creditor to exercise a lien over all the debtor's property,… Partition , Any division of real property orpersonal propertybetween co-owners, resulting in individual ownership of the interests of each. The co-ownership of r…