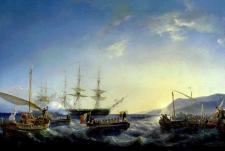 FRENCH EAST INDIA COMPANY The French East India Company (La Compagnie Française des Indes Orientales), was founded as a monopoly by royal edict of Louis XIV in 1664 at the strong urging of his finance minister Jean-Baptiste Colbert. The king was its largest investor, and the crown effectively controlled the company. After an inauspiciously disastrous beginning, it eventually became moderately successful and profitable but was always undercapitalized and dependent on loans, often from the treasury.

The establishment of the French East India Company was part of Colbert's ambitious mission to revamp France's economy. Its founding implied the removal of the monopoly from the Compagnie de l'Orient started by Cardinal Richelieu in 1642. Richelieu's company had become entangled in the colonization of Madagascar, which it saw as a necessary way station on the sea-lanes to India. As a consequence, it was unable to meet the demand for fine Indian silks and cotton goods, and a substantial market share had been taken by "foreign businesses." Colbert, a mercantilist, wished to slow, if not prevent, the steady export of wealth required to pay for the trade balance. At the time, it is estimated that the French market was purchasing 30 percent of the textiles and spices imported by other joint stock companies, chiefly the English and Dutch East India Companies.

Colbert's company was granted a fifty-year monopoly of trade east of the Cape of Good Hope, given charge of the colonization of Madagascar, two adjacent isles (Réunion and Mauritius), and trading centers in India, Sri Lanka, and Indonesia. Unfortunately, the initial reaction of French merchants was tepid; of the 15 million livres envisaged, just over eight million livres (three million from the king) were raised. Colbert's company was nearly always undercapitalized and often had to borrow money to operate from season to season.

Personnel were a second problem, solved by recruiting among the Dutch. The Dutch were hardy mariners and skilled shipwrights. Dutchmen had been crews on Portuguese vessels when that country had a monopoly on the spice trade. Once Dutch crews learned how to navigate to the Moluccas, they went into business for themselves. By 1664 there were experienced Dutch captains and sailors to be had. A third obstacle was the lack of adequate vessels, so Colbert established a port and shipyard named, appropriately enough, Lorient, on the Atlantic coast.

The first decades of the Compagnie Française des Indes Orientales were checkered. The company faced stiff competition from the Dutch East India Company, which harassed the French merchant marine and occasionally confiscated cargoes. Support from French merchants was never enthusiastic for they were subject to strict royal control. Furthermore, the company's administration deteriorated after the deaths of Colbert in 1683 and his son, the marquis de Seignelay, in 1690. The initial voyages were so commercially disastrous that Colbert had to resort to lies to hide the magnitude of the losses in order to raise more capital.

Affairs in India were better, however. François Martin, left behind after a French defeat by the Dutch and the qutbshah (king) of Golconda in San Thomé, founded Pondicherry in 1674. Pondicherry became the center of French India, lying about 85 miles (137 km) south on the Coromandal coast from the English East India Company's trading center at Fort St. George (Madras, now Chennai). Even though port facilities were inconvenient, the commercial viability of Pondicherry was based on the availability of silk and cotton textiles, calicoes and muslins, produced by nearby village cottage industries. The profitable commercial activity caught the jealous attention of the Dutch East India Company, which drove out the French in 1693. The Compagnie Française des Indes Orientales, facing deficits due to failed adventures in Madagascar and Thailand, was helpless. After a sojourn in France, where he was received cordially by king and company, Martin was named governor of Pondicherry for the third time and as director of all French factories in Surat, Chandarnagar, Calicut, Dhaka, Patna, Qasimbazar, Balasore, and Jogdia. He remained in Pondicherry, the Indian capital of the French East India Company, until his death in 1706.

With the Treaty of Utrecht in 1713, the Dutch East India Company withdrew to Indonesia, leaving England and France the only rivals in India, much as their rivalry was to dominate European affairs for the next hundred years.

When the fifty-year monopoly of the Compagnie Française des Indes Orientales expired the next year, a ten-year extension was granted to the by-then moribund company. Shortly afterward, Louis XIV died, and the duke of Orleans succeeded as regent. In 1717 the regent granted monopoly trade rights in the Caribbean, Canada, and Louisiana to a publicly traded French West India Company, La Compagnie Française des Indes Occidentales, founded by John Law, a Scottish financier. Two years later, Law persuaded the regent to meld the dormant East India and the nascent West India companies, and the conglomerate was titled simply the Company of the Indies (La Compagnie des Indes).

The new company's public stock offering was a brilliant success, briefly doubling and redoubling in value. It immediately purchased the tobacco monopoly, which was a steady source of revenue, allowing it to pay its promised dividends even as the stock was becoming grossly overinflated. The bubble burst, and by the summer of 1720, panic set in. There was a run on the Royal Bank, and the company's shares plunged. The company offered to accept all its shares at face value in return for a perpetual monopoly (its ten-year extension was due to expire in 1725), and it was restyled the Perpetual Company of the Indies (La Compagnie perpétuelle des Indes).

The crash tarnished the reputation of the Perpetual Company, however, which had to be restructured in 1723 into a private regulated monopoly, but one in which the king and regent still had substantial investments. However, the Perpetual Company was successful for several decades, becoming a serious rival to the English East India Company, and was responsible for the major French impact on India. After the Seven Years' War, the Perpetual Company declined steadily, and was completely moribund by the French Revolution.

The European competition for the lucrative trade routes to India in the seventeenth and eighteenth centuries was played out amongst rival trading companies, of which the French were relative latecomers. It is somewhat of an historical misnomer to speak of the French East India Company as a single entity because it evolved from a variety of disparate predecessors rather than from a singular corporate entity. Hence, the history of the French East India Company is not the history of a continuous, unitary corporate body. Unlike the English and Dutch companies, moreover, the later French variants were more closely aligned to the state and more prone to the fiscal pressures and internal dynamics of official government policy. While the French saw themselves as rivals to the English East India Company, however, they preferred to emulate the federated structure of the Dutch East India Company.

In fact, historians are able to trace six different companies that were formed at various times. Although Henry IV issued the first patent in 1604 to grant the Compagnie des mers Orientales exclusive rights to trade in Asia and to establish colonies, this venture was largely a failure due to lack of funds and the opposition of the Dutch. Louis XIII granted a new patent in 1615 to form a company called La Compagnie des Moluques, which sent two ships to India, of which only one returned.

However, it is not until the influence of Cardinal Richelieu under Louis XIV that maritime endeavors received the attention of the French state. The formation of La Compagnie d'Orient in 1642 was the first company of colonization in the Indian Ocean area, founding the trading post of Fort Dauphin on the island of Madagascar as the strategic midway point between France, Africa, and the lucrative Asian trade. The establishment of La Compagnie des Indes Orientales in 1664 by Jean-Baptiste Colbert and the emerging importance of colonies such as the Ile de France (Mauritius) and the Ile de Bourbon (Réunion) saw a new era of direct competition with the Dutch and the English for the South Asian trade. Whereas La Compagnie des Indes Occidentales had a trading monopoly in North America and on the west coast of Africa, the former was given the French patent to trade from the Cape of Good Hope and throughout the Indian and Pacific Oceans and, hence, covered a vast area that included the southern and eastern coasts of Africa, India, Southeast Asia, China, Japan, and stretching as far as New Caledonia and Tahiti. In 1719 the company was amalgamated into the broader American and African operations under the umbrella organization La Compagnie des Indes.

The difficulty of establishing a base on Madagascar saw the French Company look further afield to India, which was the main object of European colonial ambition. First settling in Surat in 1666 and then founding the important center of Pondicherry in 1673, the French was the last European power to compete with the Indian trade on the subcontinent and were in direct competition with the English and the Dutch who were already established there. Under Benoît Dumas and Jean François Dupleix in the 1730s to 1750s, the French Company developed a largely successful policy of forming subsidiary alliances with local rulers to gain commercial advantages and sought corporate control of Indian territory. This was a strategy that was later emulated by the British to their greater advantage.

The defeat of the French at the Battle of Wandiwash in 1760 and the intermittent capture of Pondicherry and other French settlements during the Anglo-French Wars meant that the company's operations in India were precarious. The French East India Company was liquidated in 1770 with the transfer of all assets and trading stations to the French government who took direct control of colonial affairs under the Marine Ministry. There were some attempts to revive purely commercial operations in 1785 when a new company was formed by Charles-Alexandre de Calonne, but these were thwarted by the events of the French Revolution and the emergence of the English East India Company as the paramount territorial sovereign power on the Indian subcontinent.

Boucher, P. The Shaping of the French Colonial Empire: A Bio-Bibliography of the Careers of Richelieu, Fouquet and Colbert. New York: Garland, 1985.

Encyclopedia of Western Colonialism since 1450