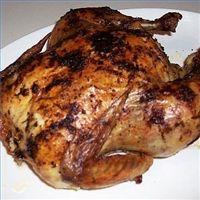 BROASTING. "Broasting" is a trademarked term for frying chicken, potatoes, and other food in a pressure cooker using equipment and ingredients obtained under license from the Broaster Company of Beloit, Wisconsin. More broadly speaking, pressure frying is a technique for frying foods in oil under pressure, which is intended to seal the surface of the food and hold in its natural moisture while producing a crisp exterior.

Broasting is found only in food-service settings, since Broaster Company sells equipment and ingredients and licenses its name and program only to retail operations, such as restaurants, fast-food outlets, and grocery stores. Broaster Company, which was founded in 1954, had about five thousand licensees in 2002. Pressure frying is also used by some of the larger food-service operations, such as KFC (formerly known as Kentucky Fried Chicken) and Chick-Fil-A. These companies do not use the term "broasted," however, since it is trademarked by Broaster Company.

Pressure frying can be attempted at home using special equipment. The manufacturers of pressure cookers, however, do not recommend using them as pressure fryers. Manufacturers specifically advise the user not to put more than ¼ cup of oil in a pressure cooker, which is less than needed for frying. Use of a large amount of oil under high heat can damage the pressure seal of the lid and lead to the escape of steam or hot oil. A few companies manufacture units specifically designed to contain hot oil under pressure, and only these pressure fryers should be used at home.

Commercial units use gas or electricity to heat oil in a fry pot sealed to hold in steam. The pressure builds up to about fourteen pounds per square inch, with the food reaching an internal temperature of approximately 250°F (120°C) as compared with the 215 to 220°F (about 100°C) that occurs in conventional frying. Cooking time is reduced nearly in half as compared to conventional units, which is a significant advantage in the quick-service setting. A single unit can cook several racks of pork ribs in one batch in seven minutes, for example.

If all goes well, the cooked product will retain less than half as much oil as food cooked in a conventional open fryer. It is believed that this occurs because natural moisture escapes through the oil in the form of steam in conventional frying. In pressure frying, steam is locked into the fry pot, and natural moisture is forced to stay inside the food, which also prevents oil from getting in and producing a greasy product. Beck Sales Company, which makes the Fagor Classic brand of pressure fryer for home use, says its fryer will produce chicken with 44 percent more moisture than open-fried chicken, with 40 to 70 percent less fat and fewer calories.

The pioneer in pressure frying was "Colonel" Harland Sanders, founder of Kentucky Fried Chicken (KFC). At his restaurant in Corbin, Kentucky, Sanders sold fried chicken prepared in the traditional southern method of frying in a skillet. He preferred this to deep-fat frying because skillet frying produces a less-greasy product, but the method takes considerably longer than deep-fat frying. When the pressure cooker was marketed in the late 1930s as a time-saving device, Sanders purchased one and experimented with using it as a fryer. He eventually came up with the right combination of time, pressure, amount of oil, and temperature, and he began to use a pressure cooker in his restaurant. By the twenty-first century, all KFC restaurants used pressure frying to cook the company's Original Recipe Chicken. Various KFC outlets use several different types of pressure cookers.

The procedure specified by the Broaster Company is typical of pressure frying operations. The chicken is marinated and breaded, in both cases with proprietary ingredients, and oil is heated in the fryer pot to 360°F. A stainless steel basket is then lowered into the boiling oil, and pieces of chicken are loaded, up to fourteen pounds per load. Since dark meat takes longer to cook, thighs are loaded first, followed by legs, breasts, and wings. The cover is then locked in place, and the pressure valve is closed, allowing pressure to build up quickly. The chicken is cooked at 360°F for eight to nine minutes, at which time the pressure valve is opened to release the steam, the cover is removed, and the chicken is drained.

It is considered important to keep the oil in the pressure fryer as clean as possible, which can be a problem when breaded products are cooked. Loose breading can create smoke and an off flavor due to the intense heat of the operation. Commercial units therefore have systems that recirculate the oil and filter out breading, carbon, excess moisture, and other impurities. This also extends the useful life of the oil. Steam can be used to force the oil out of the cooking pot and into the filter at the bottom of the cooker when the cooking cycle is completed, thus reducing the oil retained in the food and also lessening the chance of injury from hot oil when the pressure is released and the pot is opened. Pressure frying is safe when conducted according to manufacturer's instructions, but some units are equipped with built-in fire suppression systems. These systems, plus the heavy-duty construction needed for pressurized operation, make pressure fryers more expensive than conventional open fryers. Generally, pressure fryers are found only in restaurants that sell large amounts of fried chicken or other fried items.

While chicken is the best-known product in broasting or pressure frying, other foods can also be cooked in the same type of unit. Broaster Company provides its licensees with recipes, cooking instructions, coatings, seasonings, and marinades for potato wedges, catfish, pork chops, ribs, fish, shrimp, and mushrooms, among other items. While pressure frying normally uses fresh food, frozen items can also be pressure fried successfully. The finished chicken product should have a crispy, golden-brown exterior and should be tender and juicy throughout.

oxford
views updated
broasting A cooking method in which the food is deep fried under pressure, which is quicker than without pressure, and the food absorbs less fat.

A Dictionary of Food and Nutrition DAVID A. BENDER

DAVID A. BENDER "broasting ." A Dictionary of Food and Nutrition . . Encyclopedia.com. (February 14, 2020). https://www.encyclopedia.com/education/dictionaries-thesauruses-pictures-and-press-releases/broasting

DAVID A. BENDER "broasting ." A Dictionary of Food and Nutrition . . Retrieved February 14, 2020 from Encyclopedia.com: https://www.encyclopedia.com/education/dictionaries-thesauruses-pictures-and-press-releases/broasting

Hyperbaric Oxygenation , hyperbaric chamber Although Henshaw, an English clergyman, constructed a pressurized chamber — or ‘domicilium’, as he termed it — in 1662, the techno… Osmotic Pressure , Skip to main content osmotic pressure Oils , Oil David S. Painter Oil was an integral part of U.S. foreign policy in the twentieth century, and its influence has shown no sign of diminishing in… Sphygmomanometer , Definition Purpose The sphygmomanometer is designed to monitor the blood pressure by measuring the force of the blood in the heart where the pressure… National Oil Corp , National Oil Corporation Bashir Sadawi Street Tripoli Libya Telephone: (218) 21 444-6181 Fax: (218) 21 333-1930 Web site: http://www.noclibya.com Sta… Jojoba Oil , Description Jojoba (pronounced ho-ho-ba) oil is a vegetable oil obtained from the crushed bean of the jojoba shrub (Simmondsia chinenis ). The jojoba…