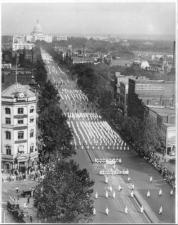 TULSA RACE RIOT (1921), one of the worst American civil disturbances of the twentieth century. Perhaps as many as one hundred people lost their lives, and more than thirty-five blocks were destroyed in the African American section of Tulsa, Oklahoma, known as Greenwood.

The riots began on the evening of 31 May, when World War I veterans heard that a young black man being held in the Tulsa County Courthouse on charges of assaulting a young white woman might be lynched. The veterans followed the advice of a local black newspaper, the Tulsa Star, which encouraged them to take action to protect against a lynching. They put on their uniforms, got guns, and went to the courthouse. When some white men tried to disarm them, shots were fired, and the riot

Around dawn on 1 June the deputies and Tulsa-based units of the National Guard began to sweep through Greenwood, disarming and arresting the residents, then taking them to "concentration" camps around the city, ostensibly for their protection. Some who refused to give up their guns were shot. Mobs of looters, some wearing deputy badges or police uniforms, followed soon after. The looters took what they could and then burned the buildings. In later years, the Oklahoma legislature contemplated paying reparations to survivors in recognition of the wrong done them.