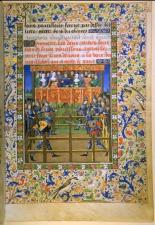 oxford
views updated
trial by battle. Before the Norman Conquest, guilt or innocence in legal disputes were decided by compurgation, where a party would summon a number of ‘oath helpers’ to swear to the reliability of his oath, or especially in cases of ‘criminal’ accusation by one of the ordeals, fire, cold water, hot water, or accursed morsel (see trial by ordeal). To these methods the Normans, with their strong militaristic tradition, added trial by battle. The parties, or champions on their behalf, would fight in formal single combat and the winner would be deemed to be the successful party in the case. Trial by battle fell into disuse, especially with the decline of the appeal of felony and the decline of writ of right in disputes over freehold land. However, it was not abolished until 1819, after the accused was challenged to combat in the case of Ashford v. Thornton.

Arthur Koestler , Arthur Koestler (1905-1983) authored one of the 20th century's great political novels, Darkness at Noon, as well as a number of other fictional works… Salem Witchcraft Trials Mass. Ct. Oyer & Terminer 1692-1693 , Beginning in 1621 Puritans moved from England to settle in the American colonies, particularly in the area of New England. Their goal was to create c… peine forte et dure , peine forte et dure. After the Lateran Council of the church in 1215 forbade the clergy to take part in ordeals, the king's justices had no means of… Alternative Dispute Resolution , Alternative Dispute Resolution (ADR) Alternative dispute resolution (ADR) is a term that refers to several different methods of resolving disputes ou… Litigation , An action brought in court to enforce a particular right. The act or process of bringing a lawsuit in and of itself; a judicial contest; any dispute.… Adversary System , The Adversary System: Who Wins? Who Loses? The legal system in the United States is known as an adversary system. In this system, the parties to a co…