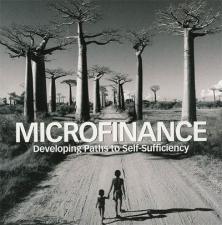 Microfinance, also termed microcredit, refers primarily to small, development-oriented loans made to low-income borrowers with the aim of helping them to develop commercial activities or start businesses.

The concept of microcredit originated with the economist Muhammad Yunus. He made a small loan to a woman in Chittagong, Bangladesh, who used it to increase her family’s income by making and selling bamboo furniture. Established formal-sector banks were not interested in making loans of such small amounts, especially to borrowers who were highly risky because they lacked both collateral and business experience. Yunus founded the Grameen Bank in 1976 as a lending institution that specialized in loans of this type.

The Grameen Bank organized potential borrowers into small groups, and put them through a training program emphasizing both personal habits and enterprise-related skills. All members of the group made regular deposits; one member of the group would be selected to receive a loan. The next loan would be made to a group member only when the outstanding loan was repaid. In effect, the social pressure of the borrower group provided a form of collateral.

Pooling savings to facilitate rotating borrowing for in-group members is not unique to Grameen Bank; migrants and co-ethnics, in particular, often make such arrangements. What is distinctive about the Grameen approach is that these pooled savings are used to facilitate entrepreneurial activity, and that women are targeted. Indeed, this bank’s design highlighted the problem of the exclusion of women from participation in markets, and the potential economic-development impact of fully engaging the resources, energy, and initiative of women once these women were freed to create their own enterprises.

Grameen’s loan program quickly became well known and found global imitators and adaptors. Economic theorists have been fascinated by the Grameen Bank, as the design of its lending-saving mechanism has interesting aspects from the perspectives of game theory and information theory. And as the Grameen model spread to other nations, a critical academic discussion has ensued about the potential and limitations of this model. One debate, summarized by Dale Adams and J. D. Von Pischke in 1992, involves whether microcredit represents a new element in developing economies, and can serve as a standalone poverty-alleviation program. A related debate, expressed by Anne Marie Goetz and Rina Sen Gupta in 1996, discusses the net impact of Grameen-type programs on women, primarily because women-centered microcredit programs may have complex and unintended effects on gender relations, and specifically on intra-household power relations and resource and debt allocations.

These controversies notwithstanding, microcredit has been broadly embraced by many development agencies and governments. The United Nations (UN) declared 2005 the Year of Microcredit, recognizing and initiating microcredit programs in more than ninety countries. The World Bank set a goal of reaching “100 million of the world’s poorest families by 2005.” Microcredit programs have received strong support from national governments: for example, the Community Development Financial Institution program in the United States, initiated in 1996, channels money to microcredit; in 2003, Brazil’s federal government began requiring all banks to set aside 2 percent of their assets for use in funding microcredit activities.

Microcredit has become a central element in the efforts of global, national, and local organizations to increase self-employment prospects for low-income people, and for providing access to credit. In October 2005, UN secretary general Kofi Annan stated that microfinance has “an untapped opportunity to create markets, bring people in from the margin, and give them the tools with which to help themselves.” He called for “scaling up” microcredit practices “without losing sight of the poorest and most vulnerable members of our society” (States News Service 2005).

With this growing government and agency attention, and these shifting expectations about what microcredit can do, most contemporary microcredit programs have only a partial resemblance to Grameen’s original program: the focus on female borrowers, on the very poor, and on extensive training of participants often disappears.

The combination of financial deregulation, proliferating publicly sponsored programs, and public officials’ shifting expectations has blurred the line between microcredit and other financial markets for lower-income people. Microcredit sometimes denotes small-denomination loans made to very small businesses, or to businesses operating in informally settled areas such as Brazil’s favelas (slums or shantytowns). In this usage, microcredit supports working-capital needs, not business creation as in the Grameen model. And in some nations, such as South Africa, the term microcredit refers generally to loan markets in which non-bank lenders provide credit to borrowers in unregulated or high-risk, low-sum credit markets. This multiplication of usages has led to the creation of a distinction between productive and nonproductive microcredit.