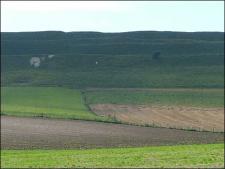 Maiden Castle is one of the largest and most impressive of the British hillforts. The site has considerable importance in the history of British archaeology, as it was originally excavated in the 1930s by Sir Mortimer Wheeler, one of the key figures in the development of British archaeology. His excavations were among the most extensive of the period and were crucial in developing the important concept of archaeological stratigraphy. They also established a diffusionist chronology for the Iron Age of southern Britain, which explained key changes in material culture as the result of invasions. Recent small-scale excavations by the author have reviewed aspects of the picture given by Wheeler but, more important, have provided a database of environmental evidence, which can be used to reconstruct the economy of the inhabitants. The hillfort is located close to the south coast of England, in the county of Dorset, and is situated on a low chalk ridge in the valley of the River Frome. The Roman town of Dorchester lies one mile to the north and appears to have been the natural successor to the hillfort.

Hillforts in this region were established in the first half of the first millennium b.c., and their appearance coincides with the dramatic changes that characterize the end of the Bronze Age and the beginning of the Iron Age. Maiden Castle had a much older history, however, and the Early Iron Age hillfort was constructed directly on top of an earlier Neolithic enclosure. This monument was an important community focus, and the large quantities of material recovered indicate that the enclosure was the focus for productive activities (flint ax manufacture) and had widespread contacts, particularly with communities in southwestern England. The hilltop appears to have lost its position as a center for the local community in the Bronze Age, and it is possible that it became a peripheral area located close to the boundaries of several distinct polities. The neutral character of the boundary location might have been a crucial reason for the establishment of the hillfort. Many of the southern British hillforts were established in similar positions, and some actually incorporated earlier linear earthworks. The size of the enclosing boundary and the area enclosed by this boundary indicate that hillforts were large community enterprises and imply the coming together of several communities.

The original hillfort of Maiden Castle was built c. 500 b.c. An area of 6.4 hectares was enclosed by a single bank and a ditch more than 8.4 meters from top to bottom, which was penetrated by two entrances, one an unusual double gateway. This hillfort is comparable to many other hillforts built at this time, and there are similar examples within a mile. Maiden Castle, however, soon became the center for the locality and then the region. For the next three hundred years the enclosure was subject to an almost continuous program of construction that focused on the enclosing boundary. After an initial refurbishment of the original enclosure, it was decided to expand the area enclosed to the west to create a hillfort 19 hectares in area. At first, this area was enclosed by a simple dump rampart and had two impressive double entrances, facing east and west, respectively. Soon, further external ramparts were added, and the original inner rampart was heightened. By the second century b.c. the hilltop was enclosed by three to four lines of banks and ditches, and the inner rampart stood more than 5.5 meters high. The entrances also had been transformed. Initially, these entrances had been fairly simple, but the addition of extra ramparts was used to create a complex interweaving of banks and ditches, which confuse the unwary visitor and conceal the entrance.

Little is known about the first occupation of the hillfort, but by the middle of the third century b.c. the interior was densely occupied and well organized. The occupation was characterized by small roundhouses, large pit silos used for the storage of cereals, and distinctive above-ground storage facilities in square timber buildings. These structures are characteristic of all Iron Age settlements in southern England, and the circular houses are a feature that distinguish Britain from the adjacent areas of the continent. The interior of the settlement was divided by roads, which were clearly visible in the geophysical survey. The economy of the hillfort was dominated by agricultural activities, and large quantities of barley and wheat indicate the importance of cereal production. Sheep were the most common animal, but cattle and, to a lesser extent, pigs were important also. Large quantities of ceramics and bone tools have been recovered, but metal tools and decorative objects are relatively rare in the Middle Iron Age contexts.

The normal explanation for the construction of these massive banks and ditches is that they reflect an increase in warfare caused by the breakdown of relationships at the end of the Bronze Age. This seems an inadequate explanation, because it does not explain the relative rarity of weapons such as swords and spears, which were common in the Bronze Age. The boundaries clearly served more complex uses than just simple defenses. It is possible that the creation of these enclosures symbolized the coming together of individual households and the foundation of a community separated and distinct from other local communities. The process of construction was an act that symbolically invoked a sense of belonging. It also provided an opportunity to compete with other communities, and the participation of communities that had been previously independent would suggest submission to the authority of the inhabitants of Maiden Castle. The massive investment in labor and resources that went into the construction of this "developed hillfort" testify to the involvement of a large number of people, and it is not surprising that Maiden Castle is the only hillfort in south Dorset of this size and complexity. By the third century b.c. the ramparts of Maiden Castle were an unambiguous indication of the status of the inhabitants and their authority over southern Dorset.

By the end of the first century b.c. the importance of the hillfort appeared to have declined. The rampart had not been enlarged for several hundred years, and the occupants seem to have abandoned the western extension. These changes coincide with the appearance of new settlements in the landscape surrounding the hillfort, and it is difficult not to conclude that people were moving out of the hillfort and that this represented a breakdown in the communal bonds that had been the strength of the community. These changes were associated with the increasing importance of material culture, and it appears that artifacts were being used to define individuals and to establish hierarchies that focused on individual identity.

The increasing importance of identity is reflected in the development of a distinctive regional burial tradition and the presence of a substantial cemetery in the eastern gateway of Maiden Castle. This cemetery is exceptionally large. Various other peculiarities, including paired burials, extended as opposed to crouched inhumations, an unusual range of grave goods, and bodies with signs of mortal injuries, make it unique. Wheeler used some of these features to present a dramatic historical reconstruction of the storming of the hillfort by the Romans, a very famous piece of historical conjecture. The story ignores many of the distinctive features of the cemetery, however, and although the Romans may have killed a few people, there was no evidence to support the dramatic storming of the east gate. The cemetery is really an indication of the continued importance of the hillfort community in a period when there were dramatic changes to the organization of society.

oxford
views updated
Maiden castle is perhaps the most spectacular Iron Age hill-fort in Britain. However, this 50-acre hilltop 3 miles south of Dorchester has a longer history stretching back to the neolithic, when a causewayed enclosure was constructed on its eastern end. Subsequently around 3500 bc a bank barrow 600 yards long was built along its central spine.

The Iron Age fort, initially enclosing 25 acres, was built over the neolithic camp around 600–500 bc. Its double eastern gateway, subsequently elaborated by the addition of stone revetting and outworks, already hinted at a special status compared to other neighbouring sites, and this was confirmed around 400–300 bc when the defended site was doubled in size. The defences were gradually elaborated by the addition of further ramparts, finally achieving their present form around 100 bc. Wheeler argued that the multivallate ramparts were for defence in depth against sling warfare, and certainly it was defended against Roman attack around ad 43–5, as skeletons with wounds from sword cuts and ballista bolts were found buried in the east entrance. In the 4th cent. ad a small Romano-Gallic temple was constructed in the interior.

Ipswich , IPSWICH Ipswich lies at the tidal reach of the Orwell estuary, in southeastern Suffolk, on the shortest crossing of the North Sea to the mouth of the… Qumran , Qumran QUMRAN , region on the northwest shore of the Dead Sea, which has become famous since 1947 as the site of the discovery of the *Dead Sea Scrol… La Tene , The material recovered at La Tène appears to have had little to do with domestic life, and though there are numerous fibulae (brooches), few objects… Dionysius The Elder , c. 430-367 b.c. Greek tyrant of Syracuse who helped establish Hellenistic control in Sicily and southern Italy and developed the first catapult for w… Acre , ACRE ACRE (Heb. עַכּוֹ, Acco, Akko ; Ar. ﻋَﻜﺎَّ ʿAkkā; Ptolemais; St. Jean d'Acre ) coastal city in northern Israel situated on a promontory at the n… Harappa , HARAPPA The Indus Civilization was first discovered in the course of exploratory excavations at Harappa by Alexander Cunningham in 1856 and 1872. Maj…