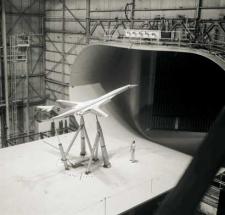 SUPERSONIC TRANSPORT. In late 1962, the governments of France and Great Britain announced their intention to jointly develop a supersonic transport (SST) named the "Concorde." Anxious that the United States not trail the Europeans in the SST market as it had in the case of jet airliners, President John F. Kennedy, in a June 1963 speech at the Air Force Academy, called for a jointly funded government-industry program to design and build an American SST. The specifications, drawn from a government feasibility study, called for a passenger capacity of 300 and a cruising speed from 2.5 to 3 times that of sound—both better than Concorde's. Boeing and Lockheed, two of the three major commercial jet manufacturers, produced full-sized mockups for a 1967 design competition. Boeing's design was heavier and more complex but promised slightly better performance and a significantly more impressive, futuristic look. It won, but engineers later abandoned its most advanced features as they struggled to build a plane light enough to operate profitably. The final design, the 2707-300, mirrored Concorde in both appearance and performance.

Opposition to the SST project emerged on multiple fronts during the late 1960s. Environmentalists warned of catastrophic damage to the ozone layer. Homeowners along flight routes rebelled against the prospect of routine sonic booms. Members of Congress objected to the use of public funds for a commercial venture. Boeing officials worried, privately, that the SST might bankrupt the company if it failed. Dismayed by rising costs, mounting opposition, and unfulfilled promises, Congress cancelled the SST program in 1971.

Ames, Mary E. "The Case of the U.S. SST: Disenchantment with Technology." In her Outcome Uncertain: Science and the Political Process. Washington, D.C.: Communications Press, 1978. Ties the cancellation to shifts in public opinion.