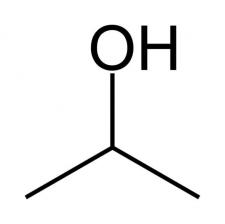 Isopropyl alcohol (EYE-so-PRO-pil AL-ko-hol) is a colorless flammable liquid with a sweet odor. In 2004, about 600 million kilograms (about 1.3 billion pounds) of isopropyl alcohol were produced in the United States, with about half of that used as an industrial solvent and about a third used in the preparation of other chemical compounds. It is perhaps best known to many people as rubbing alcohol, usually a 70 percent solution of isopropyl alcohol in water. The compound is commonly used to clean a person's skin before an injection is given. It kills bacteria on the skin and prevents infection.

Miscible with water and most common organic solvents

HOW IT IS MADE

The most popular industrial method for preparing isopropyl alcohol was invented in 1920 by researchers at the Standard Oil Company (now Exxon). In that process, propene (propylene; CH2CH=CH2) is treated with hydrolyzed with sulfuric acid as a catalyst.

Isopropyl alcohol dissolves many other organic compounds easily, so it finds wide use as a solvent for gums; essential and other kinds of oils; alkaloids; certain types of plastics; derivatives of cellulose; paints, varnishes, shellacs, and other types of coatings; and quick-drying inks. Essential oils are oils extracted from plants that have therapeutic value. Alkaloids are organic bases that contain the element nitrogen.

HYDROLYSIS
The process by which a compound reacts with water to form two new compounds.
MISCIBLE
Able to be mixed; especially applies to the mixing of one liquid with another.

Spirits , Spirits SPIRITS. Distillation is the process of separating a liquid from a solid by boiling the liquid and condensing the vapors in another container… Vinegar , Vinegar Background Vinegar is an alcoholic liquid that has been allowed to sour. It is primarily used to flavor and preserve foods and as an ingredie… Alcohol And Health , Alcohol is a central-nervous-system depressant that affects judgment, coordination, and inhibition. Mild alcohol intoxication causes a relaxed and ca… Fusel Oil , fusel oil A mixture of organic acids, higher alcohols (propyl, butyl, and amyl), aldehydes, and esters, known collectively as congeners, produced in… Aldehyde , aldehyde (chem.) fluid obtained by oxidization of alcohol; compound of this type. XIX. f. al. dehyd., abbr. of alcohol dehydrogenatum dehydrogenated… Potassium Sulfate , Accidents or crimes can occur when one or more of those involved are intoxicated. Impaired driving is the obvious example. In the United States, at l…