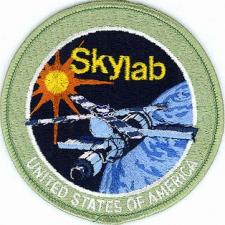 The 100-ton Skylab was America's first experimental space station , and the only one the United States deployed in the first three decades of human spaceflight. The National Aeronautics and Space Administration (NASA) announced the Skylab project on July 22, 1969, as Apollo 11 was returning to Earth from the first landing on the Moon. The Skylab assembly was not a single structure, but a cluster of four units, three of them habitable. The main body, the Orbital Workshop (OWS), was a cylinder 14.6 meters (48 feet) long and 6.7 meters (22 feet) across, with a volume of 270.4 cubic meters (9,550 cubic feet), roughly the size of a small house. The OWS was created from the remodeled shell of the propellant tank from the Saturn 5 rocket's third stage. The upper part of the OWS was equipped with food lockers, refrigerators, water tanks, and space suit lockers; the lower story contained crew quarters and an experiment station.

Attached to the OWS was the airlock module (AW), which contained the station's control and monitoring center and provided access to space for extravehicular activity (EVA). Also on that end of Skylab was the Apollo telescope mount (ATM), a solar observatory, and the multiple docking adapter (MDA), which contained docking ports for the Apollo spacecraft and controls for the ATM and other scientific equipment. The entire Skylab assembly, with the Apollo spacecraft attached, was 37 meters (120 feet) long.

Designed for long-duration missions, the Skylab program was intended to prove that humans could live and work in space for extended periods, to expand knowledge of solar astronomy and earth science, and to provide information that could be used in the development of future space stations. In addition to its suite of cameras, Skylab was stocked with tons of scientific equipment, including coronagraphs, spectrometers , and ultraviolet and X-ray telescopes. The MDA also contained equipment for space manufacturing and externally mounted Earth resources cameras.

Skylab was launched on May 14, 1973, from NASA's Kennedy Space Center by a Saturn V launch vehicle. However, 63 seconds after liftoff, the meteoroid shield, which was designed to shade Skylab's workshop, deployed accidentally. When the meteoroid shield ripped loose, it disturbed the mounting of one of the workshop's solar array "wings," causing it to partially deploy. As the launch progressed, the exhaust plume of the second stage retro-rockets ripped away the partially deployed solar array. In addition, debris from the meteoroid shield overlapped the other solar array wing so that it was held in a slightly opened position and was unable to generate power.

After reaching orbit, Skylab was maneuvered so that a separate set of solar panels on the ATM faced the Sun to provide electricity. However, because of the loss of the meteoroid shield, workshop temperatures rose to a dangerously high level. Scientists, engineers, astronauts, and management personnel at NASA and elsewhere worked to devise a way to rescue Skylab. One of their first steps was to maneuver Skylab, which was seriously over-heating, to maintain the most favorable balance between temperature and power generation capability. In the meantime, the launch of the first Skylab crew was postponed while NASA engineers developed procedures and trained the crew to make the workshop habitable. The first crew of astronauts finally arrived at the station aboard an Apollo spacecraft on May 25, 1973, about ten days after Skylab was launched.

The initial crew, consisting of Charles "Pete" Conrad, Paul J. Weitz, and Joseph P. Kerwin, spent twenty-eight days aboard Skylab (May 25 to June 22, 1973). Most of that time was spent rigging a sunshade and making repairs to the OWS, which had been badly damaged during ascent. After substantial repairs, including deployment of the parasol-type sunshade, which cooled the inside temperatures, the workshop was declared fully operable. From then on the crew conducted solar astronomy and Earth resources experiments, medical studies, and three EVAs totaling six hours and twenty minutes.

The second crew, consisting of Alan L. Bean, Jack R. Lousma, and Owen K. Garriott, continued maintenance of the space station and conducted extensive scientific and medical experiments for fifty-nine days from July 28 to September 25, 1973. The third crew, consisting of Gerald P. Carr, William R. Pogue, and Edward G. Gibson, set a U.S. flight record of eighty-four days from November 16, 1973, to February 8, 1974. Before leaving Skylab, the crew jockeyed the station into an oval orbit of 521 by 499 kilometers (324 by 310 miles) by using the Apollo service module's engines.

Despite early mechanical difficulties, Skylab was an overwhelming success, with the three crews occupying the workshop for a total of 171 days. Skylab was the site of nearly 300 scientific and technical experiments, including medical experiments on humans' adaptability to zero gravity, solar observations, and detailed studies of Earth's resources. Both the time in space and the time spent in extravehicular activities (EVAs) exceeded the combined totals of all of the world's previous spaceflights up to that time. Additionally, the capability to conduct longer missions was conclusively demonstrated by Skylab, as evidenced by the good health and physical condition of the second and third crews. By selecting and photographing targets of opportunity on the Sun and by evaluating weather conditions on Earth and recommending Earth resources opportunities, crewmen aboard Skylab were instrumental in obtaining high-quality solar and Earth data.

The conclusion of the third mission to Skylab marked the end of the first phase of the program. It was expected that Skylab would remain in orbit for eight to ten years and would be reoccupied when the space shuttle program was under way. Gradually, however, the space station's orbit began to decay because of sunspot activity that caused Earth's atmosphere to expand. In the fall of 1977 it was determined that Skylab was no longer in a stable attitude as a result of greater than predicted solar activity. A space shuttle mission was planned for February 1980 in which astronauts would attach an inertial upper stage to Skylab and boost it into a higher orbit. However, on July 11, 1979, a year before the planned rescue mission and two years before the shuttle's first flight, Skylab plunged into the atmosphere and burned up over the Indian Ocean. Some debris fell to Earth across the southeastern Indian Ocean and a sparsely populated section of western Australia. The debris did no major damage, but Skylab's flaming plunge to Earth marked the end of the Apollo era of human spaceflight.

Yenne, B. The Encyclopedia of US Spacecraft. New York: Exeter Books, 1988.

Robert Zubrin , The Mars Direct concept for a human mission to Mars has been vigorously championed since 1990 by engineer Robert Zubrin, who developed it with fellow… Space Shuttle , The space shuttle is a reusable spacecraft that takes off like a rocket, travels around the earth like a spacecraft, and then lands once again like a… Manned Spacecraft , Spacecraft, Manned Manned spacecraft are vehicles with the capability of maintaining life outside of Earth's atmosphere. Partially in recognition of… John Glenn , Glenn, John American astronaut, senator, businessman John Glenn was the first American to orbit Earth. He achieved this feat in 1962, at a time when… Eileen Collins , Collins, Eileen Astronaut Throughout her career as an astronaut, Eileen Collins achieved several firsts in the history of space travel. In 1995, when… Biotechnology , Biotechnology research in space is predicated on understanding and exploiting the effects of the unique microgravity environment on chemical and biol…