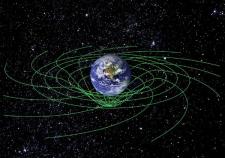 
Albert Einstein radically reshaped the understanding of gravity through his proposal of the General Theory of Relativity in 1916. The problem he tackled was to create a theory of gravity that was consistent with his Special Relativity Theory, including its radical transformation of the understanding of space and time measurements through the introduction of a unified concept of space-time. Special relativity is based on the invariance of the laws of physics under any constant change of velocity, and hence the equivalence from a physical viewpoint of all uniformly moving (non-accelerating) observers. General relativity extended these ideas to a special class of accelerating observers.

Einstein's first brilliant insight was that, in consequence of Galileo Galilei's (1564–1642) discovery in the seventeenth century that all falling bodies near the Earth accelerate at the same rate, any uniform gravitational field can be transformed away (i.e. made to vanish) by changing to a suitably accelerating reference frame; indeed for any observer in free fall, gravity effectively ceases to exist. We have seen this in films of astronauts in free fall, where gravity does not seem to act (objects float freely in the air), even though they are in spacecraft that are relatively close to the surface of the Earth, where the gravitational field is strong enough to make the spacecraft move in a circular orbit.

Thus, from a physical viewpoint, inertial and gravitational effects are indistinguishable; this is Einstein's Principle of Equivalence. There is no invariant gravitational force, in analogy to the electromagnetic force, but rather effective gravitational forces are felt by observers in consequence of their choice of reference frame. One consequence is the prediction of the phenomenon of gravitational redshift (a shifting of light toward the red end of the spectrum as a result of a gravitational field rather than a relative velocity). This has been verified by high accuracy measurements on Earth.

Einstein's second major insight (building on previous work by others, particularly German mathematician Georg Friedrich Riemann [1826–1866]) was that the principle of equivalence could be made compatible both with experimental evidence concerning gravity and with the special theory of relativity by embracing the idea that space-time is curved. Freely falling objects and light rays move on geodesics in curved space-time, that is, curves whose space-time direction is unchanging (these curves are the closest that one can get to a straight line in a curved space-time). When projected into surfaces of constant time, these paths can appear highly curved; indeed, the nearly circular motion of the Earth around the sun is the result of the Earth moving in an undeviating direction in the curved space-time around the sun. A consequence is the prediction of the bending of light by a gravitational field, which was verified in a famous experiment in 1917, when bending of light by the sun was measured during a solar eclipse. This bending leads to gravitational lensing of distant objects (quasi-stellar objects and galaxies) by nearer galaxies and cluster of galaxies, resulting in distorted images and multiple images.

Einstein's third major insight was that the spacetime curvature is determined by the matter in it. This is a major revolution in our understanding of the nature of geometry. Previously, the geometry of space (and space-time) had been assumed to be fixed and invariant, a purely mathematical construct. Einstein's proposal meant that space-time geometry varies according to the matter present; consequently geometry became a branch of physics. Einstein spent many years pondering the nature of this relation, and eventually completed his theory by proposing his gravitational field equations, which relate the stress-energy tensor of the matter present to space-time curvature. (A tensor is a physical quantity that has many components that, taken together, characterize its nature. The physical energy tensor combines in one quantity the energy density, quantum density, isotropic pressure, and anisotropic pressures characterizing a fluid. These quantities combine in different ways when different reference frames are used.) This theory can predict the motion of planets around the sun more accurately than Newtonian theory can, explaining in particular the anomalous precession of the perihelion of the planet Mercury. Indeed Einstein's theory has been tested with high precision in the solar system and has passed all observational tests with flying colors.


Predictions of the theory

The General Theory of Relativity also predicts radically new phenomena. Firstly, black holes are predicted to result at the end-point of the lives of massive stars when they have burnt all their nuclear fuel. Black holes are objects where the gravitational field is so strong that light cannot escape; a radially outgoing light ray will be halted and will fall back in to the center. Consequently an outside observer receives no light or radiation from the interior and cannot observe what is going on there. The gravitational field at the center will become so strong that a space-time singularity occurs. It is believed that black holes have been detected through the X-ray emissions associated with hot dust falling in across the event horizon, which is the surface bounding the black hole region. Any object crossing the event horizon to the interior cannot then escape; it is doomed to fall into the singularity. It is now believed that black holes exist at the center of many galaxies, including our own, and provide the power sources for incredibly luminous quasi-stellar objects. Secondly, gravitational waves will be generated by the motion of astronomical objects such as binary pulsars. It is difficult to detect them directly because they are extremely weak, but they have been indirectly detected because of their effect on the orbits of a binary pulsar (Russell Hulse and Joseph Taylor were awarded the 1993 Nobel Prize in physics for this observation). A new generation of gravitational wave observatories are being constructed, and it is hoped they will detect gravitational waves within the next ten years.

A problem with the theory is that it predicts that under many conditions (e.g., at the start of the universe, and at the end of gravitational collapse to form a black hole), space-time singularities will occur. Scientists still do not properly understand this phenomenon, but presumably it means that they will have to take the effect of quantum theory on gravity into account in some suitable generalization of general relativity, which is a purely classical theory. Additionally, general relativity in principle allows a variety of causal violations to occur (e.g., you can travel through space-time in such a way as to talk to your grandfather when he was ten years old). There is considerable debate on how to regard this feature.

The Einstein equations are extraordinarily unique, but they do allow the possibility of a cosmological constant (effectively, a very weak long-range repulsive force). This has been the subject of dispute ever since Einstein included it in his equations in 1917 in order to allow a static universe solution. He abandoned it when the expansion of the universe became generally accepted, but it keeps recurring in various forms, for example in the inflationary universe idea. There is good observational evidence that the recent expansion of the universe is dominated by a cosmological constant, however the physical origin of this universal repulsive force is unexplained. From the viewpoint of quantum field theory, its existence is highly problematic.

Encyclopedia of Science and Religion

Special Relativity (physics) , Skip to main content Special relativity (Physics) Relativity, Special Theory of The Special Theory of Relativity describes the way in which an observ… Space-time , space-time, central concept in the theory of relativity that replaces the earlier concepts of space and time as separate absolute entities. In relati… Space , Space is the three-dimensional extension in which all things exist and move. Intuitively, it feels that we live in an unchanging space. In this space… Relativity , Relativity is the physics of the nature of space and time, a branch of physics that plays a minor role in technology but is crucial in the world of e… Hermann Ludwig Ferdinand Von Helmholtz , Helmholtz, Hermann von Helmholtz, Hermann von energetics, physiological acoustics, physiological optics, epistemology, hydrodynamics, electrodynamics… Big-bang Theory , The Big Bang Theory is the prevailing theory of the origin of the universe, and it is based on astronomical observations. According to this theory, a…