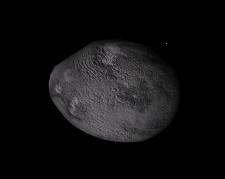 oxford
views updated
Adrastea (Jupiter XV) A jovian satellite (a moom) that orbits within the main ring of Jupiter; it and Metis may be the source of the material comprising the ring. Both are considered too small to suffer tidal disruption, but eventually their orbits will decay. Adrastea is one of the smallest satellites in the solar system. It was discovered in 1979 by David Jewitt. Its diameter is 20 km (±20) (23 × 20 × 15 km); mass 1.91 × 106 kg; mean distance from Jupiter 129 000 km.