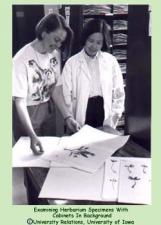 An herbarium is a collection of dried plants or fungi used for scientific study. Herbaria are the main source of data for the field of botany called taxonomy. Plant taxonomists study the biodiversity of a particular region of the world (floristic research) or the relationships among members of a particular group of organisms (monographic research). Although a plant looks different when it is dried compared to when it is growing in nature, most of the key features needed for taxonomic studies can be found in a well-prepared

herbarium specimen . These features include the size and shape of the various parts of the organism, as well as surface texture, cellular structure, and color reactions with certain chemical solutions. From the investigation of these features, the taxonomist prepares a detailed description of the organism, which can be compared to descriptions of other organisms. Today it is possible to extract genetic material (deoxyribonucleic acid; DNA) from herbarium specimens. Gene sequences provide many data points for comparison between organisms.

Herbaria of the World

If prepared and maintained properly, herbarium specimens hold their scientific value for hundreds of years and therefore serve as a repository of information about Earth's current and past biodiversity. The oldest herbaria in the world, found in Europe, are more than three hundred years old. Traditionally all colleges or universities that offer training in plant science create and maintain herbaria, as do most botanical gardens and natural history museums.

There are approximately 2,639 herbaria in 147 countries around the world. Typically herbaria associated with smaller institutions concentrate on the plants and fungi of their regional flora, and perhaps additionally hold specimens representing the research interest of the faculty and graduate students. Larger herbaria strive to represent the plants and fungi from a wider geographic area and a greater diversity of organisms. Such herbaria may be housed in large natural history museums (the Field Museum of Natural History in Chicago, for example) or botanical gardens (such as the New York Botanical Garden), major research universities (such as Harvard University), or may be maintained by a governmental agency (such as the Smithsonian Institution).

When taxonomists publish a monograph or flora, they must provide a list of all the specimens examined in the course of the study, indicating the name of the herbarium where the specimens were deposited. Because the scientific method dictates that studies be replicable, anyone wanting to repeat a taxonomist's study has to begin by reexamining the specimens that were used.

Taxonomists not only examine specimens already deposited in herbaria, but also collect new herbarium specimens in the course of their research. When taxonomists go on collecting trips, they are equipped with tools such as plastic or waxed paper bags in which to place the individual specimens, clippers, knives, trowels, and perhaps a saw. Long poles with clippers attached to the ends or tree-climbing equipment may be used to collect flowers or leaves from tall trees. Collecting underwater plants such as algae may require hip boots, snorkel and face mask, or even scuba gear. Whatever the group of organisms, a good collection consists of just enough material to contain the important features for identification, such as leaves, roots, flowers, fruits, or other reproductive parts.

A collector always takes a field notebook on a collecting trip, because it is critical to record information about the organism as it is collected. The exact locality of a collected specimen is recorded using maps, compasses, or geo-positioning devices, which enables another collector to return to the same site if more material is needed. The collector also details the surroundings of the collected specimens, including the habitat (forest, meadow, or mountainside, for example), elevation, and what other types of plants or animals are found nearby. Also recorded are features that will change when the plant dries—such as its color, size, or odor—and a photograph of the organism or collection site may be taken.

It is necessary to remove as much of the moisture as possible from collected specimens to prevent decomposition by fungi or bacteria. For flowering plants, this is done by pressing the plant in absorbent paper and placing it between rigid boards (forming what's known as a plant press), and then placing the press over a source of heat. For fungi such as mushrooms, the specimen is instead placed whole (or sliced in half) on a drying apparatus that uses low heat and a fan to remove the water. Organisms such as lichens or mosses are air-dried for several days to remove moisture. Plants that contain a large amount of water are challenging to prepare as specimens. Cactus stems or large fruits such as pumpkins must be thinly sliced before pressing, and the absorbent material around the specimen must be replaced frequently.

When the specimen is dry, it is prepared for insertion in the herbarium. Preparing the specimen at this stage involves two steps: packaging and labeling. The typical pressed plant specimen is glued to a sheet of heavyweight paper, typically 27.5 x 43 centimeters in size. Specimens such as bryophytes, lichens, fungi, or very bulky plants are loosely placed in paper packets or boxes. Boxes are also used for specimens of very hard material such as coconut fruits or pine cones. Some plants and fungi are very tiny, consisting of a single cell, and therefore too small to see without a microscope. An herbarium specimen of such an organism is stored on a microscope slide. Whatever the size of the specimen, each is accompanied by a paper label, which includes the name of the plant and all of the information the collector recorded in his or her field book. In the past these labels were written by hand or manually typed. Today the collection data are more commonly entered into a computerized database and then formatted to print on a specimen label.

After an herbarium specimen is prepared, it is ready to be inserted in the herbarium. A modern herbarium holds its specimens in specially designed, air- and water-tight, sealed steel cases, which are divided internally into shelves or cubbyholes. When stored in such a case, herbarium specimens are protected from the greatest threats to their long-term maintenance, namely damage by water, insects, and fungi. Within an herbarium case, individual specimens are usually grouped by name or geographical region into folders or boxes.

An herbarium is usually maintained by a curator, a scientist responsible for overseeing the processing of new herbarium specimens, maintaining order within the collection, and guarding the specimens against damage. The curator is usually a taxonomist, chosen for the position because of his or her knowledge of the types of plants, fungi, or area that is the specialty of the herbarium. Large herbaria with important collections in many regions or groups of plants have many curators, each responsible for a particular part of the herbarium. In smaller university herbaria, the curator may also be a professor.

A curator is also responsible for overseeing the use of the herbarium by other scientists. Herbaria make their specimens available for study by visiting scientists and most also loan specimens to other herbaria when requested to do so. Herbarium curators want to make the specimens in their care available to all serious scientific studies. In addition to loaning specimens and welcoming other scientists into their herbaria, curators today often share searchable indices or catalogs, or even images of their collection through the World Wide Web. Scientists use the Internet for quick access to information about a specimen but generally still need to see the actual specimen to study it fully.

Although taxonomists are the most frequent users of herbaria, there are many other users. A forester might examine collections made over the years to see how biodiversity of the forest has changed over time. A conservation biologist might use an herbarium to see how the distribution of a rare or a weedy species has changed due to alterations in the environment. A government agency might use an herbarium to determine where to place roads or dams to cause the least disturbance to a biologically diverse area. A plant pathologist might use an herbarium to examine specimens that are the cause of plant diseases or to examine the distribution of the plant hosts of diseases to predict future areas of infection. Occasionally historians consult herbaria to learn more about the people who have collected plants over the years. For example, it is not well known that historical figures such as General George A. Custer, inventor George Washington Carver, or musician John Cage collected herbarium specimens, but collections made by all three have been found in the New York Botanical Garden herbarium, and other long-established herbaria probably contain equally surprising finds.

Pitcher Plant , pitch·er plant • n. a plant with a deep pitcher-shaped pouch that contains fluid into which insects are attracted and trapped. Nutrients are then abs… Horticulture , Introduction Horticulture concerns the growing and raising of plants. In particular, horticulture is concerned with plants that are economically impo… Paleobotany , palaeobotany The branch of palaeontology concerned with the study of plants through geological time, as revealed by their fossil remains (see also pa… Plant Diseases , Plant pathology is the study of diseases, injuries, or other factors that affect the welfare of plants. It is mostly an applied science, meaning that… Insectivorous Plant , insectivorous plant (carnivorous plant) Any of several plants that have poorly developed root systems and are often found in nitrogen-deficient sandy… Evolution Of Plants , Modern classification systems, based largely on molecular evidence, divide living organisms into three domains: Bacteria (also called Eubacteria), Ar…