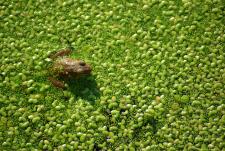 All land plants have evolved from aquatic ancestors. Species from nearly one hundred flowering plant families, along with some ferns, mosses, and liver-worts, have reinvaded the water. Many land plants can tolerate flooding for some time. A good definition of aquatic plants is therefore difficult. The term is normally used for plants that grow completely underwater or with leaves floating on the surface. Parts of the shoot, particularly flowering stems, will often grow up above the water. Most aquatic plants live in freshwater—in lakes, ponds, reservoirs, canals, or rivers and streams. These habitats are very different in water depth, flow rates, temperature, acidity and alkalinity (pH ), and mineral content. Some aquatic plants live in river mouths, with an ever-changing mixture of fresh- and saltwater, and a few (such as sea grasses) live completely submerged in the sea. Aquatic plants can be free-floating (e.g., water hyacinths) or rooted to the bottom of the pond or stream (e.g., water lilies). The most important grain crop in the world, rice, is an aquatic plant.

Water supply is generally not a problem for aquatic plants. They do not need waterproof cuticles or a lot of woody tissue to keep them erect. Life underwater, however, is a challenge. All green plants need oxygen and carbon dioxide. These gases cannot diffuse easily from the air down through the water. Most of the alterations in physiology and structure in water plants are adaptations to solve these gas exchange problems. Many water plants develop large internal air spaces—aerenchymatous tissues—in their roots and shoots. These air spaces make the tissues buoyant and help them float. Green leaves, photosynthesizing underwater in the light, release oxygen that can be temporarily stored in the air space and later used for cellular respiration. If the plant grows or floats to the surface, oxygen can also easily diffuse down through the air spaces. One of the water lilies, Nuphar, has even developed a ventilation system to circulate air from the leaves floating on the water surface down to its roots in the mud. The rapid growth of shoots to the surface—called depth accommodation growth—seen in rice seedlings and many other aquatic and amphibious species, is driven by the shoot buoyancy and a buildup of carbon dioxide and the naturally produced gas, ethylene, in the tissues under water. Plant organs in the mud at the bottom of lakes survive long periods without much oxygen.

The amount of light available for photosynthesis declines with depth (especially in dirty water), and the light quality (the proportion of red, far-red, and blue light) is also altered. Some species (e.g., Potamogeton, Sagittaria ) can produce underwater, floating, or emergent leaves, each with different shapes and structures all on the same plant—a phenomenon called heterophylly. This is a response to light quality and the amount of a plant hormone, abscisic acid (which is at slightly higher levels in emergent shoots).

Most aquatic plants flower and set seed. Many of them, however, can also grow rapidly and reproduce vegetatively. Aquatic plants, particularly free-floating species, can colonize the surface of a water body very quickly. If the water dries up, plants can produce a variety of tubers and resting buds (turions) that will persist in the mud until the water returns. These abilities make aquatic plants some of the most troublesome and persistent weeds in the world, particularly in tropical and subtropical countries. There is, understandably, considerable reluctance to put herbicides into rivers and lakes. A wide variety of control methods, including mechanical harvesting and the introduction of fish and other animals to eat them, have been attempted. The canal system of late nineteenth-century Britain was clogged with introduced Elodea canadensis; the water hyacinth, Eichhornia crassipes, has spread from tropical South America to waterways in Africa, Asia, and North America; and Salvinia auriculata, a free-floating aquatic fern, rapidly covered the 190-kilometer lake behind the Kariba Dam on the Zambezi River in Africa in the 1960s. The Everglades and waterways of the southeastern United States have been repeatedly invaded by quickly spreading, alien aquatic plants.

Many aquatic habitats, and the aquatic plants that live in them, however, are under constant threat from pollution and from drainage for urban and industrial development across the globe. Aquatic plants can help remove pollutants and purify our water supplies. They are also a vital part of a fully functional aquatic ecosystem for fish and other wildlife.

The presence of aquatic plants is one of the best indicators of whether a lake or a stream will be a good producer of fish. Most aquatic life which fish feed upon requires these plants for food. Plants also provide a fishery with protective cover and life-giving oxygen.

Aquatic plants are classified into submerged, floating, and emergent varieties.

Submerged plants are rooted on the water’s bottom but do not extend all the way to its surface. Eelgrass is an example

The most important plant class is the submerged variety because it provides an abundance of aquatic food on the lake’s or stream’s bottom. It is also easier to fish than the other two because it produces less plant clutter and snags.

Plants require sunlight for growth and photosynthesis to occur. Plants are restricted to waters receiving sunlight. In most waters, a depth of ten to thirty feet is the limit that sunlight can penetrate. This means that plants are most abundant in the shallows and decrease in quantity as the water deepens. Shallow shorelines protected from floods and wave actions favor the most abundant growths.

In general there are three zones of aquatic plants. (See Diagram 1) The first zone consists mainly of rooted plants with their tops extended to the surface air. These consist of emergent plants. They occur in depths from the edge of shorelines to about the six foot depth. Cattails, reeds, and others are common plants found in this first zone.

The second zone is made up of rooted plants which shelter floating portions on the surface. This zone is deeper than the first zone and spreads to about the ten foot depth. Waterlilies and pond weeds are examples.

These three zones somewhat overlap. In areas of heavy currents, flood and wave action can dismantle plant growth and in some of these areas plants may be absent.

The most desirable plants to locate are the submerged growths of zone three. These support adequate depth for protective cover and an ample food supply.

Specific plants are favored by different aquatic life forms. Callabaetis mayflies, dragonflies and damselflies are found in certain plants such as the submerged varieties. These insects are stalkers and lie in wait to prey upon their victims.

Fish forage the aquatic plants looking for food. It is these plants that generate most of the fish’s food supply.

Coastal Management , An ecosystem is an interacting community of organisms and their non-living physical environment occupying a certain place and time. Coastal ecosystem… Hydrophyte , hydrophyte Any plant that lives either in very wet soil or completely or partially submerged in water. Structural modifications of hydrophytes includ… Insectivorous Plant , insectivorous plant (carnivorous plant) Any of several plants that have poorly developed root systems and are often found in nitrogen-deficient sandy… Deciduous Plant , A perennial plant that seasonally loses its leaves (and/or stems) is deciduous. This loss is typically related to water stress; for example, green po… Phototropism , Phototropism (pronounced foe-TA-tro-piz-em) is the growth of a plant in the direction of its light source. Plants are very sensitive to their environ… Mycorrhizae , Mycorrhizae Mycorrhizae are intimate, mutually beneficial associations between fungi and the roots of plants (mycorrhiza comes from the Greek word me…