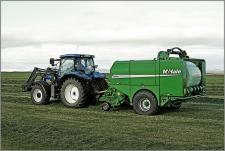 The term "hay baler" refers to a particular piece of agricultural equipment used to harvest hay. Hay includes grasses and other plants called legumes. Timothy Grass, alfalfa, and clover are common hay crops. These crops, used as animal feed, are cut with a mowing machine when they are about 18 inches (46 cm) tall and still green. The mowing machine cuts and crimps the forage and discharges it into a 4-feet (1.2 m) wide windrow. This crimping process breaks the stems and makes the hay more palatable to cattle. A hayrake is used to turn the hay over so that the windrow can dry completely. The baler gathers the cut hay from the windrow and compresses it into square- or round-shaped bales for easy transportation and storage.

Most hay is stored as bales, with small square bales weighing 40-70 pounds (18-32 kg) and large round bales weighing 750-2,000 pounds (341-908 kg). Small bales must be protected from rain and snow in a dry place such as a barn or hay shed. The large round bales can be left outside because the rain will run off the sides, instead of soaking through and rotting the hay. Small bales can be fed by hand into feed bunks or hay feeders. The larger round bales are handled with a tractor equipped with a "bale mover," a spear-like attachment that pierces the bale and allows the hydraulic loader to lift and transport it to the feeder.

During the late 1800s and early 1900s, farming was changing dramatically with the introduction of many new machines. Until that time, hay had been stored loose in the upper story of the barn, or "haymow," where it took up considerable space. By compressing the hay, or baling it, more hay could be stored in the same amount of space. One of the first balers was powered by horses walking on an inclined treadmill. As the leather and wood treadmill belt moved with each step of the horse, it turned a shaft that operated a chain drive. The chain drive, through a variety of sprockets, drove a plunger into the baler, which compressed the hay. Hay was hauled to the baler from the field in wagons, and then forked into the bale chamber by hand. Wooden blocks were dropped into the chamber when the bale reached the right size. Wire or twine was then threaded around the bale and tied by hand. As technology improved, the steam traction engine replaced the horse, and the internal combustion tractor eventually replaced the steam engine. By the 1930s, balers were attached to tractors, and they automatically picked up hay from the ground. Improvements in hydraulics allowed the introduction of the large round baler in the late 1960s. Companies such as John Deere, New Holland, and Hesston have continually refined the baler into a modern farm implement.

Hay balers are pulled behind and powered by the tractor in the field. The baler has flotation tires, which reduce the damage to the hay stubble by distributing its weight over a larger area. Also connected to the tractor is the Power Takeoff Shaft (PTO), which transmits rotary power from the tractor to the baling mechanism. Along the sides of the hitch are the hydraulic hoses that operate the various controls on the baler using hydraulic pressure from the tractor. When operating the baler, the tractor pulls the baler pickup, a horizontal spool of moving steel teeth, in line with the windrow and engages the PTO drive.

Operation of a Small Square Baler

The hay enters the baler through the pickup, and the teeth gently rake the hay from the ground to prevent the loss of leaves and ingestion of rocks or debris into the baler. Directly behind the pickup is the compressor bar, which holds the hay in place so the auger can feed it into the bale chamber. The bale chamber contains a plunger that drives in and out, each time packing and compressing hay into the desired shape. The plunger also cuts the ends of the hay to make the bale an uniform size. The chamber feeds into a spring tension section that keeps the bale tightly compressed until enough hay has been processed to complete the bale. When the correct length of bale is achieved, a mechanism wraps the bale with two lengths of twine or wire and ties it securely. The twine is carried on spools and fed through two curved needles that are timed to miss the cycle of the plunger. After the twine is in place, a gear mechanism called a knotter ties the knot and cuts the twine free of the supply spool. All of this motion occurs in less than two seconds, and must be carefully timed to prevent interference with the continued operation of the rest of the baler. After it is tied, the bale is pushed down the bale chute and falls to the ground. Some balers have "kickers," or bale ejectors, which throw the bale onto a hay rack pulled behind the baler.

Operation of a Large Round Baler

Like the small baler, the large round baler uses a pickup to load the hay from the ground into the bale chamber. Here, how-ever, the hay is wrapped onto itself by six to eight long rubber belts that are 7 inches (18 cm) wide. As the hay is drawn into the machine, the bale becomes round and fills the bale chamber to capacity. The hay exerts force upon the belts, which is in turn monitored by the hydraulic system. Once a predetermined pressure is reached, a signal is transmitted to the tractor operator. The operator stops the forward movement of the baler, and the bale is automatically wrapped with twine or protective sheeting. After wrapping, the tension on the belts is released and the entire rear portion of the baler is opened by hydraulic cylinders. The bale then simply rolls out onto the ground. The baler is pulled ahead, the rear closes, and baling resumes. The entire process can be operated from the tractor, and bale ejection takes from 15 to 45 seconds.

Balers are constructed primarily of structural and sheet steel. This steel can be in bar stock, sheets, or in rolls. Hydraulic cylinders, pumps, wheels and tires, belts, and other components are purchased from suppliers and shipped to the baler assembly plant. The belts are made of nylon and polyester, a material similar to tires. All raw materials are carefully specified by the engineering staff after extensive testing and research. Many portions of the baler arrive as subassemblies, put together by divisions of the baler manufacturer or by independent suppliers.

During a production run, balers are closely inspected at various stages for proper function and durability. Whenever possible, features are designed into parts and processes to prevent incorrect parts and subassemblies from leaving the assembly line. Occasionally, a completed baler is taken from production for testing either by special test equipment or by actual field trials. Subassemblies can be tested and even destroyed without sacrificing the entire baler.

Data acquisition computers are used to record the test performance and, using Computer Aided Design (CAD) programs, offer engineering changes to improve performance. Like automobiles, balers have local service dealers that can notify customers of correct maintenance procedures and/or new features that may be retrofitted to existing balers.

Processing hay for animal feed has improved greatly in the past 20 years, primarily due to the advent of the large round baler. Even larger balers are on the market, but the round baler seems most popular at present. As the size and complexity of the machine increase, so does the cost. Custom balers, people who bale for resale, are a large portion of the new baler market, along with large corporate farms. These operators usually have the larger tractors to power big balers, and with improvements in hydraulics and bale wrapping, the large baler will probably be the standard for the next several years.

How Products Are Made Betts, Douglas

Betts, Douglas "Hay Baler ." How Products Are Made . . Retrieved January 24, 2020 from Encyclopedia.com: https://www.encyclopedia.com/manufacturing/news-wires-white-papers-and-books/hay-baler

Crane (machine) , Crane Background A crane is a machine that is capable of raising and lowering heavy objects and moving them horizontally. Cranes are distinguished fr… Stapler , Background There are virtually as many types of staplers as there are uses for them. Staplers are produced for use in: the manufacture of furniture;… Machine Tool , A machine tool is an electrically powered tool which is used to remove material, usually metal , at a controlled rate to achieve a desired shape or f… Ferris Wheel , Background A ferris wheel is an amusement park ride consisting of a large vertical wheel with places for people to sit or stand spaced evenly around… Coffin , Coffin Background Coffins, or funeral caskets, are containers in which the dead are buried. Burial practices differ markedly across cultures and thro… Bulldozer , Background Popularized in the 1920s and used heavily ever since, the bulldozer, commonly termed a dozer, is a clear offspring of the crawler tractor.…