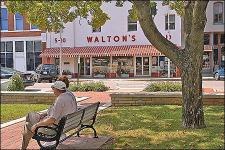 oxford
views updated
Pea Ridge, Battle of (1862).The Battle of Pea Ridge, 6–8 March 1862, resulted from a Union army campaign to clear Missouri of Confederate forces during the Civil War and to begin a major offensive down the Mississippi River valley. Brig. Gen. Samuel R. Curtis's Army of the Southwest drove Maj. Gen. Sterling Price's Missouri State Guardsmen from southwestern Missouri into northwestern Arkansas in February 1862. Reinforced by Brig. Gen. Benjamin McCulloch's division and placed under the command of Maj. Gen. Earl Van Dorn, the entire Confederate force was designated the Army of the West. With 16,500 men, Van Dorn attacked Curtis's 10,250 men. Limited fighting occurred on 6 March as Confederate units harassed a Union detachment marching from Bentonville to join Curtis at Pea Ridge. On 7 March, Van Dorn completely outflanked Curtis's army and attacked in two columns, cutting the Federal line of communications. Curtis changed the front of his entire army from south to north.