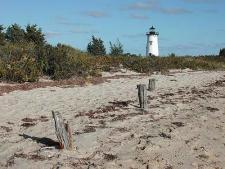 MARTHA'S VINEYARD, an island off the southwestern coast of Cape Cod, Massachusetts, was visited by Giovanni de Verrazano, Samuel de Champlain, and possibly Norse explorers. The island was given its name in 1602 by Bartholomew Gosnold. It was bought in 1641 by Thomas Mayhew, an English merchant who also acquired the rights of government. The first settlement was founded at Edgartown within a year. The Mayhew family held manors and offices for life until the American Revolution put an end to hereditary pretensions. Formerly an important whaling center, since the mid-nineteenth century Martha's Vineyard has been a well-known summer resort.