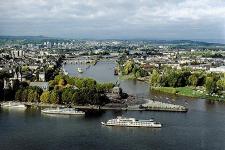 KOBLENZ , city in Germany. Jews are first mentioned in a customs toll of 1104; an individual Jew, Vives of Koblenz, is noted as living in Cologne about 1135; the community is mentioned in *Benjamin of Tudela's Itinerary (c. 1172). A 1209 toll register set a discriminatory fee for Jews but the Mainz Nuremberg *Memorbuch credits "Isaac and his wife Bela" with its removal. The Jew Suesskind granted a loan against the security of a mortgage on a house to Archbishop Theodore of *Trier, which the latter had redeemed by 1238. In 1265 Archbishop Henry granted the Jews a privilege of protection, yet on April 2, 1265, some 20 Jews were slain. A father who had martyred his wife and four sons but was himself saved from committing suicide by gentiles asked *Meir of Rothenburg if he had to do penance and was given a lenient reply, referring to earlier such events.

Archbishop Henry's peace treaty with the city, signed in 1285, after a revolt, stipulated that violation of Jewish life and property should be punished. In 1307 the Jewish community (universitas Judeorum), headed by a magistrate, received the rights of joint citizenship from the municipality. Jewish houses and properties are mentioned in sources dating from 1275 to 1333, the Jews' gate in 1282, the cemetery in 1303, and the nursing home in 1356. The main Jewish quarter was near the Old Town. R. *Asher b. Jehiel moved to Koblenz (c. 1282) and his older brother Ḥayyim functioned there as rabbi. The scribe Eliezer b. Samuel ha-Levi wrote a parchment Bible in 1344. The names of three Jews who died as martyrs in 1287 or 1288 have been preserved. From 1279 to 1346 Jews appear as moneylenders to the city council, the archbishop of Trier, and the local nobility: the Moselle bridge tolls were frequently farmed to them. The Jews were persecuted again in 1337, and most severely during the *Black Death in 1348–49. Their property was sold by Archbishop Boemund, but they were again living in Koblenz from 1351 on under the archbishop's protection. The city law, codified some time before 1424, excluded Jews, along with clerics and servants, from jury service in the courts. Added sections concluded in 1515 contain a Jewish oath formula with threatening clauses in case of perjury characteristic of the 15th century and later. The Jews were expelled from Koblenz in 1418.

Almost 100 years later (1512–18) a new community came into being with the admission of five families, who obtained a charter. The Trier bishopric issued successive Jewry regulations from 1555 to 1771, restricting the Jews to pawnbrokerage and certain kinds of trade. In 1723 they were ordered to live on a Jews' street (renamed Mint Street in 1886), and to refrain from wearing bright, costly clothes. The rabbinical synods of the Trier bishopric frequently met in Koblenz, concerning themselves with education and communal welfare. The authority of the local rabbi extended over the entire region. A welfare organization was founded in 1772. The Memorbuch begun in 1610 (continued until 1850) lists the names of the community leaders, many of whom were talmudic scholars and physicians, foremost among them the *Wallich family.

Turin , TURIN TURIN (It. Torino ), city on the Po River, N.W. Italy. Turin was the capital of the duchy of Savoy and later of the kingdom of Sardinia; it is… Salzburg , SALZBURG , city and province in W. Austria, formerly archbishopric and duchy. The first mention of Jews in the archbishopric occurred as early as 803… Moravia , MORAVIA (Czech Morava , Ger. Maehren , Heb. ,ןרהרמןיררעמ), historic region of the Czech Republic (formerly in *Czechoslovakia). A political unit from… Baden , BADEN BADEN , part of the Land of Baden-Wuerttemberg, Germany. The former grand duchy was created in 1806 from parts of various territories (includin… Nice , Nice NICE (Heb. ניצה), capital of the Alpes-Maritimes department, on the Mediterranean coast of France. The first specific mention of Jews can be fou… Hanover , HANOVER (Ger. Hannover ), city in Germany. Sources dating from 1292 note the presence of Jews in Hanover's "old city" (Altstadt). The period was one…