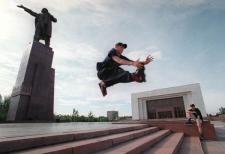 oxford
views updated
Bishkek (formerly Frunze) Capital of Kyrgyzstan, central Asia, on the River Chu. Founded in 1862 as Pishpek, it was the birthplace of a Soviet general, Mikhail Frunze, after whom it was renamed in 1926 when it became administrative centre of the Kirghiz Soviet Republic. Its name changed to Bishkek in 1991, when Kyrgyzstan declared independence. The city has a university (1951). Industries: textiles, food processing, agricultural machinery. Pop. (1999) 762,308.

Vilnius , The capital of the Lithuanian Republic and historically the capital of the Grand Duchy of Lithuania, Vilnius occupies a special place in a number of… Union Of Soviet Socialist Republics , Type of Government The Union of Soviet Socialist Republics, or the Soviet Union, was the world’s first Communist state, existing from 1922 to 1991. I… Soviet , Soviet Soviet (sovet ) is the Russian word for "council" or "advice." Its political usage began during the Revolution of 1905 when it was applied to… Andrei Andreyevich Gromyko , Andrei Andreevich Gromyko (1909-1989) represented the Soviet Union for many years in major international conferences after World War II, first as min… Tashkent , Tashkent is the capital city of the Republic of Uzbekistan, a country located in the region of Central Asia between the Amu Darya and Syr Darya river… Astana , Astana (formerly Aqmola) Capital-designate of Kazakstan, on the River Ishim in the steppes of n central Kazakstan. Under Soviet rule, Aqmola function…