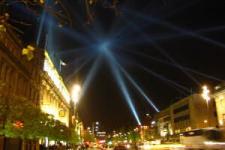 oxford
views updated
Dublin takes its name from the Irish Duibhlinn, ‘black pool’, which may refer to a pool on the river Liffey's tributary, the Poddle. Duibhlinn was an ecclesiastical centre seized by the Vikings in 841. The city's alternative Irish name, Áth Cliath, ‘the ford of the hurdles’, explains its strategic significance, being one of the region's most important river crossing-points. It quickly became the main Viking military base and trading centre in Ireland and its Hiberno-Norse rulers exercised power over its hinterland (which later developed into County Dublin), though its forces were famously defeated by the Munster king Brian Boru at Clontarf in 1014. Thereafter, Irish rulers established themselves as kings of Dublin and by the time Ireland was invaded by the Anglo-Normans in 1169 Dublin was effectively the country's capital. It fell to Anglo-Norman arms in 1170, was taken by King Henry II into his own hands, and remained the headquarters of the English colony in Ireland, enjoying a period of development and prosperity which continued until the early 14th cent. The subsequent decline lasted well into the 17th cent., considerable growth taking place following the Restoration in 1660. The 18th cent. was arguably the most colourful era of the city's history, the arts and architecture in particular finding encouragement from the wealthy society of what was now regarded as the second city of the empire. Under the Wide Streets Commissioners (established in 1758), Georgian Dublin flourished and the abolition of its parliament in 1800 did little to lessen the city's expansion. Opposition to the Union led to the Easter Rising in the city in 1916 and Dublin featured prominently in the war which led to the establishment of the Irish Free State in 1921, with Dublin as capital and the home again of an Irish parliament.