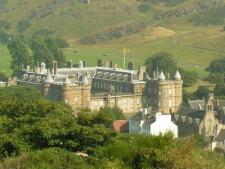 oxford
views updated
Holyrood (Edinburgh). The palace of Holyroodhouse, with Holyrood abbey in its grounds, stands at the foot of the Canongate in the Old Town of Edinburgh, in the lee of Arthur's Seat. Holyrood abbey was built for Augustinian canons, and the ruins of its 12th- and 13th-cent. nave have inspired many travellers, including Felix Mendelssohn on his Scottish tour in 1829. The palace of Holyroodhouse, the official residence in Scotland of the reigning monarch, was started in the reign of James IV of Scotland and extended by James V. In 1671–9 it was enlarged and remodelled for Charles II to the designs of Sir William Bruce (c.1630–1710), assisted by Robert Mylne (1633–1711), the king's master mason. It is set around the four sides of a courtyard, and although the interiors are in an Anglo-Dutch style, the character of the exteriors is French. After a period of change and neglect, royalty came back to Holyroodhouse in 1745 in the person of Prince Charles Edward Stuart (Bonnie Prince Charlie), but it was not until after George IV's visit in 1822 that it was rejuvenated. Improvements were carried out 1824–35 by the architect Robert Reid (1774–1856), and subsequent alterations by Queen Victoria completed the transformation of Holyroodhouse from a Restoration to a Victorian palace.

Wales , Wales, principality of Wales, principality of. The term refers to the territorial dominion of the last Welsh princes of Wales; the estate granted to… Stuart , Stuart (British royal family) Stuart or Stewart, royal family that ruled Scotland and England. The Stuart lineage began in a family of hereditary ste… Prince Rupert (person) , Rupert, Prince (1619–82). Prince Rupert had two military careers, as an army officer until 1646 and as a naval commander thereafter. Son of Elizabeth… Prince Of Wales , prince of Wales. The title ‘prince of Wales’ was not of great antiquity when it was bestowed by Edward I on his 16-year-old son Edward in 1301. Llywe… Louis Francis Albert Victor Nicholas Mountbatten 1st Earl Mountbatten Of Burma , Louis Mountbatten (1900-1979) was one of the last of Britain's great war heroes. After his assassination by the IRA in 1979, the world joined Britain… Duchy Of Cornwall , Cornwall, duchy of. From the Norman Conquest onwards, Cornwall has had close links with the crown. William the Conqueror gave large estates there to…