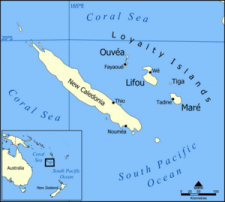 There are four major resident groups in the Loyalty Islands of Melanesia: Dehu, also known as De'u, Drehu, Lifou, Lifu, and Min; Iaai, also known as Iai and Yai; Nengone, also known as Mare and Iwatenu; and West Ouvean, which is also known as Faga-Uvéa and Ouvean. In 1982 the population of the islands was approximately 22,100. The Loyalty Islands are located in the southwestern Pacific, just northeast of New Caledonia, which they were affiliated with in an areawide trading network. Dehu, Iaai, Nengone, and their various dialects are classified in the New Caledonian Group of the Austronesian Language Family. West Ouvean and its variants are classified in the Polynesian Group of Austronesian languages.