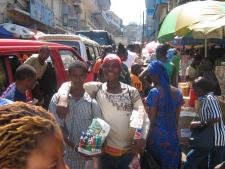 oxford
views updated
Freetown Capital and chief port of Sierra Leone, w Africa. First explored by the Portuguese in the 15th century and visited by Sir John Hawkins in 1562. Freetown was founded by the British in 1787 as a settlement for freed slaves from England, Nova Scotia and Jamaica. It was the capital of British West Africa (1808–74). West Africa's oldest university, Fourah Bay, was founded here in 1827. Freetown was made capital of independent Sierra Leone in 1961. Industries: platinum, gold, diamonds, oil refining, palm oil. Pop. (2002 est.) 1,032,100.