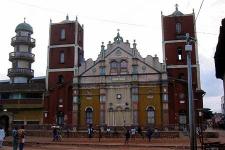 oxford
views updated
Porto-Novo Capital of Benin, West Africa, a port on the Gulf of Guinea near the border with Nigeria. Settled by 16th-century Portuguese traders, it later became a shipping point for slaves to America. It was made the country's capital at independence in 1960, but Cotonou is assuming increasing importance. Today it is a market for the surrounding agricultural region. Exports: palm oil, cotton, kapok. Pop. (1992) 179,138.

Douala , Douala •Allah, calla, Caracalla, Haller, inshallah, pallor, Valhalla, valour (US valor), Whyalla •gabbler, tabla •ambler, gambler, rambler, scrambler… Bushehr , Bushehr Bushehr Bushehr (bōōshĕr´) or Bushire (–shĬr´), city (1991 pop. 132,824), SW Iran, on the Persian Gulf. It is one of the chief ports of Iran,… Persian Gulf , The Persian Gulf, known to Arabs as the Arabian Gulf, is a crescent-shaped stretch of water forming an extension of the Indian Ocean. The entrance fr… Antananarivo , Antananarivo (äntänänärē´vō) or Tananarive (tänänärēv´), city (1993 pop. 675,669), capital of Madagascar. Antananarivo is Madagascar's largest city a… Libreville , Libreville Capital and largest city of Gabon, w central Africa, at the mouth of the River Gabon, on the Gulf of Guinea. Founded by the French in 1843… Addis Ababa , Addis Ababa (ăd´Ĭs ăb´əbə) [Amharic,=new flower], city (1994 pop. 2,112,737), capital of Ethiopia. It is situated at c.8,000 ft (2,440 m) on a well-w…