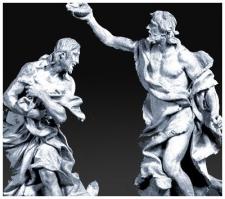 A church order written in Syria about 380. The full title, Ordinances of the Holy Apostles through Clement, suggests that these canons had been drawn up by the Apostles and transmitted to the Church by clement i of Rome. In reality they are the work of an Arian, who seems to be identical with the fourth-century interpolator of the Epistles of St. ignatius. The first six of its eight books are an adaptation of the didascalia apostolorum, a Church Order composed in the first half of the third century in Syria.

The Constitutions contain canonical legislation for the clergy and deal with Christian ethics, the penitential discipline and Eucharistic Liturgy, fasts and feasts, schism, heresy, and Christian burial. Book 7, 1–32, is based on the didache; book 7, 33–38, contains a very interesting collection of Jewish prayers; 39–45, the Antiochene rites of Baptism and Confirmation; and 46–49, other liturgical material, especially (47) the Gloria in excelsis as the liturgical morning prayer.

Book 8 is the most important. Its first two chapters probably used a lost work of hippolytus of Rome, Concerning Spiritual Gifts; ch. 3–22 adapt the Apostolic Tradition, formerly called the Egyptian Church Order. Book 8, 3–27, is an elaborate version of the Antiochene Liturgy. This section contains (5–15) the so-called Clementine Liturgy for use in the consecration of a bishop. Its completeness renders it a valuable source for the history of the Mass. Chapters 16 to 46 describe the duties of the members of the community. Chapter 47 comprises the so-called Apostolic Canons, a collection of 85 canons, derived in part from the preceding Constitutions, in part from the canons of the Councils of Antioch (341) and Laodicea (363). The first 50 of these were transmitted by dionysius exiguus and were used in later canonical collections of the West. The last of the 85 canons contains a list of Biblical books that omits the Book of Revelation, but adds the Apostolic Constitutions and the two epistles of Clement to the canon of Scripture.

An "Epitome" of book 8 of the Constitutions draws independently on the Apostolic Tradition. The title "Epitome" is misleading because it is not an abbreviation or condensation, but a series of excerpts. In some of the manuscripts this "Epitome" is called "Constitutions through Hippolytus." Time and place of origin are unknown and difficult to determine but the excellence of its readings suggests that these extracts must have been made at a fairly early date after the composition of the Constitutions.

Orthodoxy , Orthodoxy African Orthodox Church, Inc Albanian Orthodox Diocese of America American Carpatho-Russian Orthodox Greek Catholic Church American Exarcha… Second Vatican Council , Vatican Council, Second Second Vatican Council, popularly called Vatican II, 1962–65, the 21st ecumenical council (see council, ecumenical) of the Ro… Preamble , The part of the Constitution that we read first is the part of the original Constitution that was written last. The Preamble, which sets forth the no… Conservatism , Conservatives would agree with Robert Bork's understanding of the role of the Supreme Court under the Constitution and with its implicit understandin… Constitutional Court , Broadly defined, a constitutional court is a court that adjudicates disputes over the interpretation and application of a political system's constitu… Patriarchate , PATRIARCHATE Part I: Historical Developments A patriarchate (Gr. πατριαρχεíα, Lat. Patriarchatus ) is a patriarch's office, see, reign, or, most ofte…