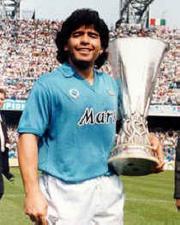 oxford
views updated
Maradona, Diego Armando (1960– ) Argentine footballer. A gifted striker, in 1984 he transferred to Napoli for $8.2 million, helping the Italian team win two Serie A titles (1987, 1990), the Italian Cup (1990), and the UEFA Cup (1989). Maradonna was captain of Argentina's World Cup-winning team of 1986, infamously scoring a goal with his hand in the quarter-final against England. He won more than 80 caps for Argentina, leading them in two more World Cups (1990, 1994). He was banned during the 1994 World Cup after testing positive for ephedrine.

Multidisciplinary Team , MULTIDISCIPLINARY TEAM Many seniors enjoy good health and independence well into their ninth and tenth decades. However, some develop illnesses and f… Zinedine Zidane , Zidane, Zinédine Zinédine Zidane Zinédine Zidane (born 1972) was the toast of France after leading that country to its only World Cup soccer champion… Bart Conner , Nadia Comaneci 1961- Romanian gymnast Nadia Comaneci made her mark on the gymnastics scene and on the world with her breathtaking performances at the… Diego Maradona , Diego Maradona Diego Maradona Diego Maradona (born 1961) is an icon in Argentina, much like Evita Peron. As a soccer player, he took his team to new… Franz Anton Beckenbauer , Beckenbauer, Franz Franz Beckenbauer 1945- German soccer player Franz Beckenbauer is the only person who has won soccer's World Cup as team captain a… Briana Scurry , Scurry, Briana 1971– Soccer goalie She has been called the “Jackie Robinson” of soccer. Like Robinson, a world famous athlete who broke down racial b…