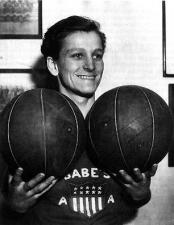 Called "the athlete phenomenon of our time, man or woman," Mildred "Babe" Didrikson Zaharias (1913-1956) participated in almost every sport. She excelled as an Olympic athlete and as a golfer.

Mildred Didrikson, known throughout her life as Babe, was born June 26, 1913, at Port Authur, Texas. She always credited her father for her interest in sports. Babe first came to national attention when the Dallas-based basketball team for which she played forward won the national AAU (Amateur Athletic Union) championship. Her outstanding play earned her an All-American award in 1929. In 1932 she entered the tryouts for the Olympic games at the national AAU's women's track and field championship. Of the eight events that she entered, she won five—shot put, baseball throw, long jump, javelin, and 80-meter hurdles. In a single afternoon she set four world records, scoring an incredible 30 points. The second place finisher, with only 22 points, was an entire women's athletic club.

Later that year she competed in the Olympic games held at Los Angeles. She won gold medals in two events— hurdles and javelin—and set world records in both. For her performance the Associated Press (AP) named Babe the Woman Athlete of the Year. She would win that award five more times. Later, in 1950, she was named AP's Woman Athlete of the First Half of the Twentieth Century.

Meanwhile, Babe took up other sports—football, boxing, baseball. She played for the touring baseball team of the House of David and pitched an inning for the then Brooklyn Dodgers and in an exhibition game for the St. Louis Cardinals. She even managed to strike out the equally famous Joe DiMaggio. It was for such all-around skills that sports writer Grantland Rice called her "the athlete phenomenon of our time."

After the 1932 Olympics Babe turned to golf and in 1934 won her first tournament. Due to a technicality, she was declared ineligible to compete as an amateur and as a result played as a professional until she was reinstated as an amateur in 1944. In 1938 Babe married former professional wrestler George Zaharias, who became her biggest supporter. She won 17 straight amateur tournaments, and in 1947 she became the first American to win the prestigious British Women's Amateur Championship.

She then gave up her amateur standing and, with Patty Berg, founded the Ladies Professional Golf Association. She won the Women's Open in 1948 and 1950 and the Tampa Open in 1951. In 1953 she contracted cancer, but after an operation she returned to win the Women's Open in 1954 and received yet another AP Woman Athlete of the Year Award. The cancer, however, proved to be terminal, and Babe died on September 27, 1956. She was 43.

To relive the excitement that Babe Didrickson Zaharias created, a reading of contemporary newspaper accounts, particularly those of Grantland Rice, are a must. The definitive biography is William O. Johnson's Whatta-gal: The Babe Didrikson Story (1977). Younger readers might enjoy Gene Schoor's Babe Didrikson, the World's Greatest Athlete (1978). □