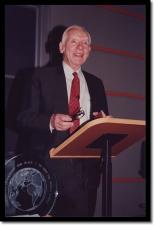 ROTBLAT, SIR JOSEPH (1911–2005), physicist and Nobel Peace Prize laureate. Rotblat was born in Warsaw, Poland, and became a U.K. citizen in 1945. He graduated with an M.A. in physics from the Free University of Poland (1932) and a doctorate in physics from the University of Warsaw (1938). He worked in the Warsaw Radiological Laboratory before joining James Chadwick as an Oliver Lodge Research Fellow at the University of Liverpool (1939). His work helped to establish, firstly, that a sustained fissile chain reaction could follow the bombardment of uranium with neutrons, and secondly, that this reaction produced the transuranic element later named plutonium. Subsequently in 1944, he joined the Manhattan Project in Los Alamos but returned to the U.K. the same year because of moral scruples about producing nuclear weapons once it was clear that the Germans could not do so. He was the only project member who left on moral grounds. He was director of research in nuclear physics at Liverpool University (1945–49) before becoming professor of physics at St. Bartholomew's Hospital Medical College, University of London, and chief physicist at St. Bartholomew's Hospital (1950–76), after which he became emeritus professor. During this period he pursued research on the biological effects of irradiation and the clinical applications of radioisotopes resulting in notable papers on subjects such as the diagnosis of thyroid disease and the deleterious effects of the bone-seeking isotope strontium-90. His concerns over the potential catastrophic effects of nuclear weapons were enhanced by his analysis of the radioactive fallout from hydrogen bomb tests at Bikini Atoll. This led him to sign the Russell-Einstein manifesto of 1955 warning about the consequences of war involving nuclear weapons. In 1957 Rotblat and Bertrand Russell founded the Pugwash Conference on Science and World Affairs, an international organization of scientists and others seeking solutions to global security threats and ultimately to eliminate nuclear weapons. In 1995 he and the Pugwash Conference shared the Nobel Peace Prize. He continued to express his concerns over nuclear and biological warfare after the Cold War ended and continually stressed the social responsibilities of scientists. His honors include the c.b.e. (1985), the Albert Einstein Peace Prize (1992), belated election to the Royal Society (1995), and a knighthood (1998). His wife, the former Tola Gryn, was unable to join him in 1939 and perished in the Nazi occupation of Poland.