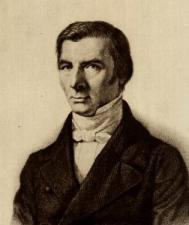 Frédéric Bastiat (1801–1850), the spokesman for the liberal, optimistic school of French economics, was born in Bayonne. The son of a merchant, he was orphaned at the age of nine. Bastiat went to school at Sorèze, where he received an encyclopedic education, learned English, won a prize for poetry, and devoted himself to philosophical studies. At 17, the aspiring poet had to become an “aspiring businessman” in the firm of an uncle, which led to his reading J. B. Say and Adam Smith and gave him a taste for political economy. In 1825 an inheritance brought him back to his birthplace, and he began to manage his property at Mugron, discharging also, conscientiously and independently, his duties as justice of the peace and general councilor of the Landes.

With a friend, Bastiat set up a study circle in his village. It was an argument about England with a member of this circle that caused him to subscribe to an English newspaper and thus to learn of the Manchester League and of Richard Cobden’s battle against protective tariffs. Bastiat became a “French Cobden,” and the first article that he sent to the Journal des économistes in Paris (1844), an article on French and English customs duties, created a sensation. As a polemicist in Paris, he began to set forth his ideas in a number of magazines and newspapers, especially in Libre-Échange, the weekly organ of the Associations pour la Liberté des Échanges (Associations for Free Trade), which he founded in 1846. At the time of the revolution of 1848, he was elected representative of the Landes in the constituent assembly, and later, in the legislative assembly, and he gave lectures, made public addresses, and generally fought socialism with as much vigor as he had fought protectionism. But he fell ill and went to Italy, where he died, in Rome.

Bastiat as pamphleteer . Bastiat is noted primarily for his work as a pamphleteer. He had an exceptional talent for making his opponents’ doctrines look ridiculous and, in general, for popularizing economic doctrines. Something of the quality of his mind is revealed by the fact that he was said to have both the wisdom of Franklin and the intelligence of Voltaire.

He was a thoroughgoing liberal and a believer in the virtues of competition, anxious to defend the individual against the state; his main targets were protectionism, socialism, and Ricardian economics. His parables showing the absurdity of protectionism, for example, his “Petition From the Manufacturers of Candles …” (1845) or his “The Right Hand and the Left” (1847), have remained famous. In such pamphlets as “L’état” (1849), The Law (1850a), and “What Is Seen and What Is Not Seen” (1850b), he attacked the Proudhonian forms of statism and socialism. He attempted to under-mine confidence in government intervention and to show how onerous were the services ostensibly rendered gratuitously by the state. “That Bastiat from the Landes,” as Proudhon called him contemptuously, wrote, in a famous lapidary phrase: “The state is the great fiction by means of which everyone tries to live at the expense of everyone else.”

Bastiat and the French classical school were convinced that liberty and private property are the pillars on which the best of all possible worlds rests. They deplored the pessimism of those econo-mists whose predictions destroyed faith in natural law. Their goal, therefore, was to rid the science of economics of the doctrines of Malthus and Ricardo by showing that their laws were without foundation. This anti-Ricardianism and optimism went so far as to constitute a belief in universal harmony.

Bastiat as theoretician. Bastiat held that the most liberal society is at the same time the most prosperous and the most progressive; that the perfectibility of man depends on his steadily increasing mastery of nature; and that social progress depends on economic progress. Harmony is a state in which the laws of nature and existing institutions such as liberty and property converge to increase what is good. Only man can disturb this harmony by undermining these two basic institutions through oppression and spoliation, for he alone is responsible for conflict in the economic world.

In order to reconcile the conflict between Ricardo’s labor theory of value and the theory of value as utility, Bastiat erected a theory of value as service. The measure of the exchange value of a product is the service that it renders the buyer in terms of trouble saved: “Value is the ratio of two services exchanged.”

In Bastiat‘s optimistic view, land produces not value but utility, which is, as is everything that nature provides, gratuitous. According to this theory, then, Ricardo’s theory of ground rent is invalid. What is more, in the total amount of production, the part attributable to nature increases, while the part attributable to labor decreases, so that the extent of gratuitous utilities common to all expands at the expense of earned and appropriated utilities. This process continues until it culminates in the collective enjoyment of goods.

As wealth becomes increasingly gratuitous, property becomes better distributed, and the interests of capital and labor come to coincide. With progress, the rate of interest falls, and although the incomes of both the capitalist and the worker rise in absolute value, that of the capitalist increases less, proportionately, than does that of labor. Liberty has a natural tendency to create that equality which socialists want to institute by other means; Bastiat’s quarrel with Proudhon on the interest rate is famous.

Finally, Bastiat denounced protective tariffs as robbery of the consumer, and insisted, even on his deathbed, that the subordination of the producer to the consumer is necessary if private interest is to be subordinate to the general interest and harmony is to prevail.

Influence. In his own time, Bastiat had considerable influence, but his fame is now in eclipse. He was surrounded by a group of economists who supported his ideas—in particular, Charles Dunoyer, Michel Chevalier, Adolphe Blanqui, and Joseph Gamier—and by other admirers. After 1860, Francis A. Walker introduced his doctrines into the United States. At the turn of the century, Charles Gide expressed his admiration for Bastiat, and such pre-World War i French liberals as Pierre Paul Leroy-Beaulieu, Gustave de Molinari, and Yves Guyot relied on Bastiat’s authority.

It is all too easy a task for twentieth-century economists to demolish Bastiat’s theories, and even the claim that he anticipated the theory of the multiplier cannot easily be defended. Bastiat won over his contemporaries but disappointed his successors.

[For the historical context of Bastiat’s work, see the biographies ofMalthusandRicardo.]

(1845) 1877 Petition From the Manufacturers of Candles, Wax-lights, Lamps, Chandeliers, Reflectors, Snuffers, Extinguishers: And From the Producers … of Everything Used for Lights. Pages 73–80 in Frédéric Bastiat, Sophisms of Protection. New York: Putnam. → First published in French.

Gide, Charles; and Rist, Charles (1909) 1948 A History of Economic Doctrines From the Time of the Physiocrats to the Present Day. Boston: Heath. → First published in French.